Competitors ‘Back The Blue’ at recent rodeo 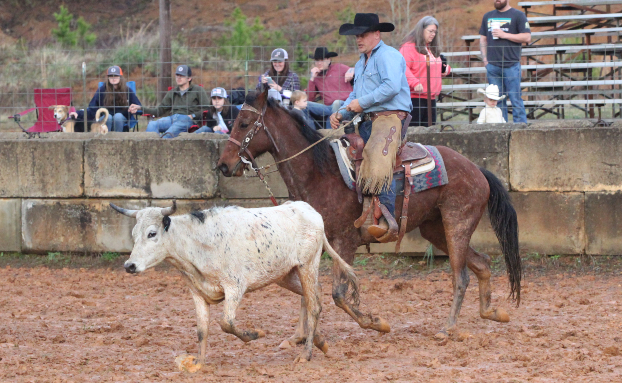 Frank Moore and his horse, Goose, look to wrangle a stray head of cattle in the recent Back The Blue Rodeo at the Stanly County Fairgrounds. (Photo by Charles Curcio/staff)

One benefit event at the American Legion Arena on the Stanly County Fairgrounds looked to “Back The Blue.”

Frank Moore, the event’s organizer, said he has these charity rodeos “to glorify the Lord.”

Moore described himself as having battled drug addiction for 17 years. He said in giving his life to God, “He set me free from it.”

At the rodeos, Moore said he shares his testimony with those in attendance. He will choose a local church or addiction ministry to which he donates a portion of the money raised.

Rodeo is a sport unlike others, he said, noting the patriotism of those involved.

“We’re proud to be Americans. We’re going to stand and salute the flag, and we’re going to back the blue,” Moore said.

One part of the rodeo had three-man teams competing in three common activities on a ranch: stray gathering, doctoring and branding. Moore said the events were more of what one would see people doing daily.

In that competition, John Campbell, Colton Childers and Steve MacIntyre, known as The Enforcers, won the event. MacIntyre is a former pro hockey player from Saskatchewan who played with several teams, including the Charlotte Checkers.

“This is something for young and older men,” Moore said, adding women compete in the ranch rodeo alongside men.

The rodeo also had a cowgirls’ triathlon which included calf roping, a barrel run and tying up a goat, won by Sara Bass.

When rains looked to cancel the rodeo, Moore said he prayed for the Lord’s will for the event. The rain stopped, allowing the competition to move forward with fans attending the event as well.

“The people came here to show their love and appreciation for the local police…It’s not about Broken Pipe Ministries, it’s about our local community, our police officers and serving the Lord,” Moore said.

Moore plans to have another rodeo in Albemarle in November.