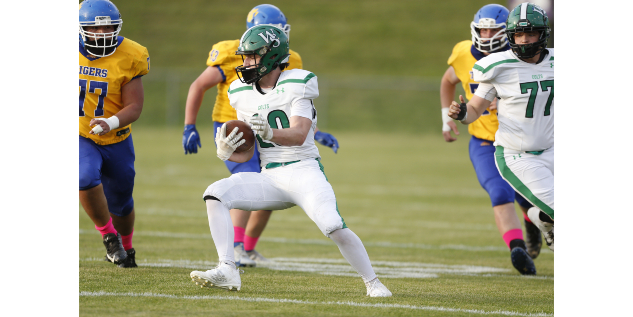 West Stanly’s undefeated streak in football was tested Friday night in a showdown for the Rocky River Conference title at Mount Pleasant.

With the only guaranteed spot in the postseason from the RRC also up for grabs, West got an early lead.

But injuries incurred in the game coupled with a second-half surge by the host Tigers led to a 19-13 loss for West.

Mount Pleasant (7-0, 5-0 RRC) finished undefeated in the regular season for the second time under head coach Michael Johns, who has coached the Tigers since 1998. Mount improved from 4-8 last season to win the title.

“We felt like we were going to have a good team this year,” Johns said.

He said playing against West is always a hard-fought, entertaining game, noting the stands on both sides were full of supporters.

West head coach Brett Morton credited some of the team’s younger players for stepping up when others went out with injuries.

“They had not played much on varsity before, and they played well. I am very proud of all of them,” Morton said.

The game could not have started better for the Colts (3-1, 3-1 RRC). West opened with a 12-play, 89-yard scoring drive taking almost five minutes off the clock. Logan Little scored on a reverse from 14 yards out, with Jaime Jaramillo’s PAT putting the Colts up early.

However, fate shifted for the Colts on Mount Pleasant’s first offensive play from scrimmage. Gavin Hudson came in on a blitz and tried to make a cut. He fell to the ground in pain, grabbing his right leg, and did not return.

Mount Pleasant answered West’s early touchdown with a 52-yard touchdown pass from Ryan Tyson to Bryce Porter to tie the game late in the first half.

The Tigers nearly scored to end the second quarter with a missed field goal, but got the ball to start the second half and scored immediately. Tyson found Hank Allen for an 18-yard touchdown pass.

Mount then added what proved to be the game-winning TD four minutes later when Tyson threw his third TD of the game, this one to Xavier Lamb.

Trailing 19-7, the Colts mounted a late rally with a six-minute scoring drive ending early in the fourth. Braden Hartsell, who took over at fullback for Hudson, capped a 58-yard drive with a seven-yard TD run. The extra point was no good, but the Colts were within one possession, trailing 19-13.

Hartsell also got credit after the game from Morton for his efforts. The junior led the Colts with 82 rushing yards on 13 carries.

West mounted one final drive late in the game, driven in part with a 29-yard pass from starting QB Jordan Manshack to Austin Stoker. The Colts got to the Tigers’ 18-yard line, but a holding penalty and a fumble stalled the drive. Mount Pleasant then ran out the clock for the win and playoff bid.

The Colts did not qualify for the postseason and will graduate nine seniors this season, including Manshack.