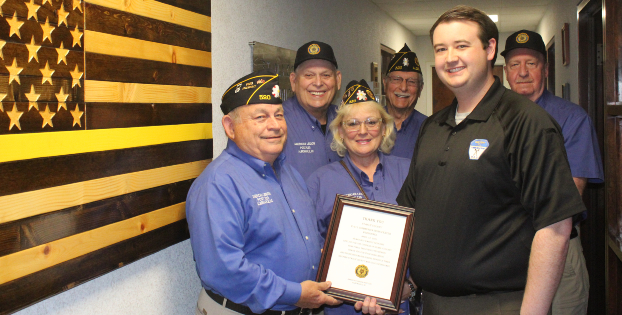 One group of frontline workers not getting enough praise for their work, according to one local civic group, is emergency telecommunicators.

Each worker at Stanly 911 received a letter of appreciation along with gift cards to a local restaurant.

The honors came from the Post during National Public Safety Telecommunications Week, which runs through Saturday.

Stanly County 911 Director Kyle Griffin said it was awesome to receive this honor for his department.

“A lot of times, people remember who responds to their house, those faces. But truly, the people that answered the phone here are the first links in that chain of getting them there,” Griffin said.

Being essential workers as well in the COVID-19 pandemic, Griffin said it’s been challenging keeping it staffed.

“We have to have people in there. We just can’t close down,” Griffin said. “We have had to make some adjustments, but we have fared pretty well through it.”

While plans to move the 911 facility to a bigger space are in the long-term budget priorities of the county, Griffin said Stanly 911 has received some upgrades, including new computer monitors. The department is also in the process of getting updated computer equipment.

Allen Lawrence, Treasurer for Post 520, said over the years the American Legion, Veterans of Foreign Wars and Disabled American Veterans have honored law enforcement, fire department and EMS workers with a dinner.

Last year, the group was going to honor 911 telecommunications employees, but the pandemic stopped it. The Legion post honored them this year with a gift card and a plaque instead of a dinner.

“These guys are the unsung heroes. They have to be able to keep their composure…and multitask,” Lawrence said.

Lawrence knows the efforts of 911 communicators. He is now retired after working 41 years with the police department and EMS.

“We wanted to recognize these workers in a small way to show our veterans appreciate what they’re doing for our community.”