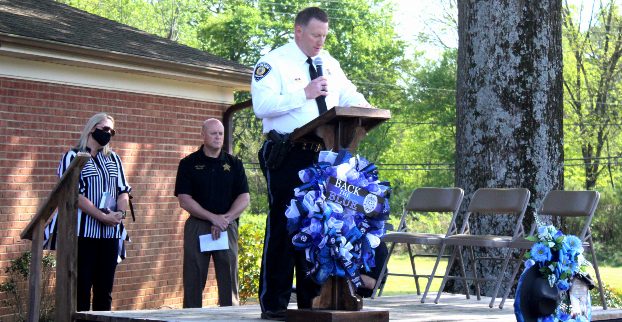 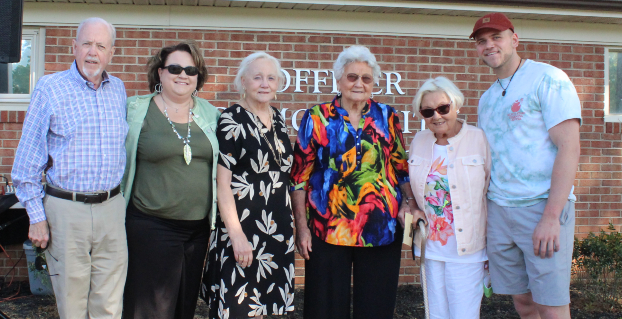 Oakboro Police Chief T. J. Smith, Stanly County Sheriff Jeff Crisco and many officers from both departments and others gathered with Damon Smith’s family Thursday in Oakboro for a remembrance ceremony.

Also in attendance was Master Police Officer Tracy Parker, who was the telecommunicator for Stanly 911 the day of the shooting.

The bell of Oakboro’s fire truck No. 443 was rung 25 times, once for each year Damon has been gone.

Stanly 911 Communications Director Kyle Griffin then honored Damon by reciting a call over the radio regarding Officer Smith, noting when his end of watch came.

Oakboro’s police chief, speaking to those assembled, said he did not know Damon but shared facts about his life. Damon served in the Army as a calvary scout in West Berlin during the Cold War. He won the Army Achievement and Good Conduct medals, along with an overseas service ribbon.

“We don’t know what God’s plans were on that tragic day. What we can see is how the town of Oakboro has grown in the years since,” the chief said.

“That was always Damon’s vision for the town he called home.”

Damon wrote a statement on his police department job application stating he wanted to be an officer, from which the Oakboro chief quoted.

“I see this job as an opportunity to police where I live. I think I would make a good police officer, and I have a lot to offer the community,” Damon said in the statement.

“Damon understood community, and I believe he would be proud of this department today,” Chief Smith said.

Chief Smith shared a quote with those in attendance about Damon.

“A hero is an ordinary person who faces extraordinary circumstances and acts with honor, courage and self-sacrifice,” Smith said.

Crisco said law enforcement is not a profession but a calling.

“I would argue there are few undertakings so noble as the protection of our community and citizens. It is defined by service and attracts those who truly believe they can make a difference,” Crisco said.

“It was (Damon’s) job to question suspicious people, run towards the danger and guard the ones that are weak.”

A young officer when the incident happened, Crisco said the tragedy was difficult to comprehend because Damon Smith “did things by the book.”

“We understand bad things happen to good people, but it should not happen to officers who do all the right things while protecting their community,” Crisco said.

“The men and women who commit their lives to serving the communities all across the nation are a truly special group of people,” Waits said.

After the service, Damon’s mother, Rita Smith Griffin, said the service was emotional to her but appreciated the department honoring him.

“It was because he was such a good man,” Griffin said.

As a practice, she said she always introduces herself to police officers she sees everywhere to thank them for their efforts.

“Every day, I ask God to bless (police officers) and hold them safely in His arms. I know the pain of what happened to my son,” Griffin said.

“You always want someone who died the way he did in heroic fashion to be remembered,” Whitley said.

A native of Oakboro, she added the town’s naming the new police station after him “is very much an honor.”