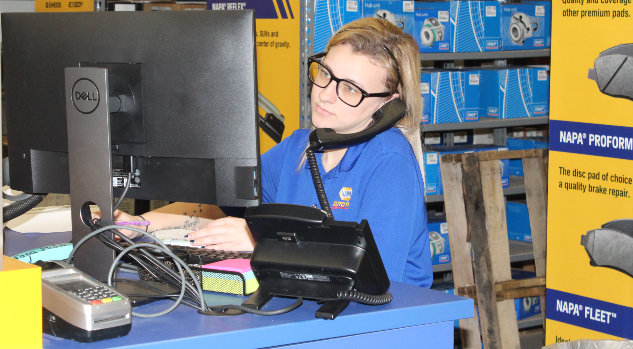 NAPA Auto Parts' Shelby Moser helps a customer on the phone. The new location for the NAPA store next to Harris Teeter in Albemarle is now open. (Photo by Charles Curcio/staff)

“More Parts, More Cars” is the slogan for the NAPA Auto Parts store in Albemarle, which recently moved from its location on South Fourth Street to the First Street Station shopping area.

Next to Harris Teeter, the new location has a larger showroom, according to Rocky Tucker, the store’s manager. The showroom is approximately 2,500 square feet and will have areas for weekly and monthly specials.

He said the new NAPA store also has seen a significant increase in foot traffic.

With the new expansion will also come more inventory in terms of car parts behind the counters, along with Craftsman tools, batteries, oil and car accessories in the showroom.

In terms of job opportunities, the store will look to hire two part-time workers at the counters, a full-time worker and a driver.

The NAPA store had been at the previous location since approximately the 1950s, Tucker said. He said many people who were brought up buying NAPA auto parts stay loyal to the store.