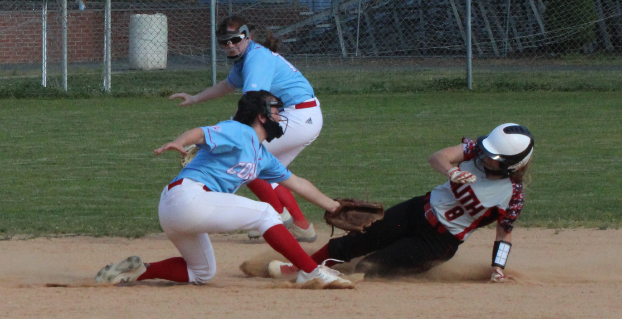 The Bulls were 3-1 last season before the pandemic shut the season down. Five seniors graduated from that team, of whom three play in college: Kaitlyn Tucker (Presbyterian), Adrianna Efird (Mount Olive) and Mattie Hinson (Pfeiffer).

This season, the Bulls have not lost a game, including Tuesday’s 11-0 win at North Stanly. With the win, South secured the Yadkin Valley Conference title, and a guaranteed spot in the 1A state playoffs.

Head coach David Poplin, who led South to its second softball state title in school history in 2012, said winning the conference is always a goal going into each season.

Having not played last season puts the coaching staff in a position of not knowing much about other schools who will vie for the title.

This year’s team is younger than 2020, with just six upperclassmen. South’s success has relied on two freshmen who have stepped up, according to Poplin: Mary Hinson and Cassidy Smith. Both stepped into the starting lineup and hit well, he said.

The season has been about challenges, which Poplin said his players face by bringing it every day in practice.

“We work them in practice. We don’t play; we get after it,” Poplin said.

Senior first baseman Emma Campbell said the players have supported each other this season.

“We don’t have any drama or anything, and I think that helps us a lot,” Campbell said.

Senior center fielder Emma Crump said South’s players do not play for themselves.

“We play to get that win as a team. We practice really hard and prepare for the games,” Crump said.

Missing out on a playoff run last year has been a motivation for the team, Campbell added.

“We didn’t have the chance last year, even though it could have happened, [and it] makes us want (the title) more this year for ourselves and for them,” Campbell said referring to last year’s seniors.

The Bulls have some tough non-conference games coming up, including Monday’s showdown with West Stanly, another undefeated team.

Campbell said what is important for the team going into the postseason will be to continue to work on the little things which others do not always do.

“It’s important for us to keep playing as a team…and being responsible so that we can keep going,” Crump added.

As the team’s head coach said, “the ultimate goal is a state title.”