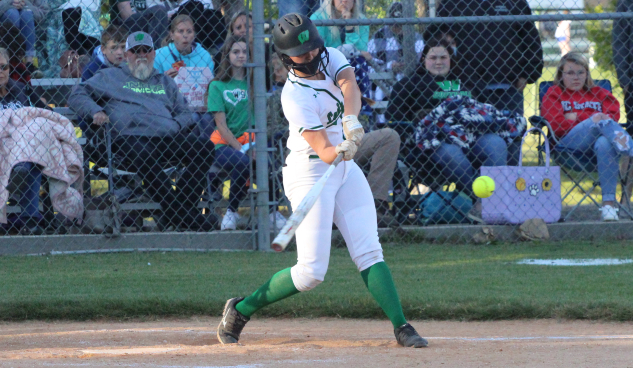 West Stanly catcher Shelby Barbee makes contact for one of her three hits in Wednesday's win over Mount Pleasant. Barbee drove in six of West's 10 runs in the game. (Photo by Charles Curcio/staff)

West Stanly, like the other softball state champions from 2019, did not get the chance to defend its 2A title in 2020. The pandemic stopped the softball season last March with West returning most of the team from the title squad.

This year, the Colts lost just one player from the 2020 roster and look again to make a run at a state title. West Stanly clinched the Rocky River Conference this week with wins over Anson and Mount Pleasant, guaranteeing a playoff bid.

West (10-0, 9-0 RRC) celebrated Senior Night Wednesday with the team’s six seniors. Including the win over the Tigers, West’s 2021 seniors have a 66-4 record over the past four years.

The Colts also have a 31-game active conference win streak, and have won the regular-season title three years in a row.

Head coach Craig Carter said this season’s team has the power hitting of 2019 but may be better defensively. He added he would like to see West more consistent at the plate.

“There are still some things we need to work on offensively to get better,” Carter said. “I feel really confident in our girls. When they are focused and attentive, they do well.”

Fire From The Circle

One senior has been a stalwart in the pitching circle for the Colts dating back to the state title season. Jordan Hatch, who will play Div. I softball next year at East Carolina, is 10-0 this season with a 0.93 earned run average. She has struck out 108 batters to 13 walks for a ratio of 8.31 in strikeouts to walks.

Hatch said playing just a conference schedule, with one non-conference win over South Caldwell, is not like a normal season. However, she said the Colts have done well this season.

She added the staff and players are being very careful about COVID protocols. Hatch said, “we don’t want to ruin” the season.

“It’s been super special and I’m glad we’re going to get a chance to get to the (state) championship.”

“A lot of us have known each other, grown up and played softball together for so long. It’s going to be super sad when we don’t get to play with them anymore,” Hatch said about her team.

The senior pitcher said she feels like the team “has a lot of weight on their shoulders” about expectations for a title run.

“With how much talent we have, we feel a lot of pressure and we’re trying to live up to it.”

Big Numbers at The Plate

Another of the team’s talented seniors is Hatch’s batter mate.

Catcher Shelby Barbee leads a West offense, which has outscored opponents this season 119 to 9. Entering the Mount game, the Colts were batting .377. Barbee leads West in batting average (.542), on-base percentage (.622) and runs batted in (24).

The Colts also hit the ball out of many parks. Barbee leads West with six home runs, the last of which was a three-run shot which provided a 10-0 six inning win Wednesday over Mount.

As a team West has 14 home runs with another senior, Meredith Harwood, having gone yard four times in 2021.

Barbee agreed losing the previous season to COVID was tough, but said West still has the drive this year to make a run at the title.

“This is our last year. We have something to prove. We are the defending state champions and we just have to go for that title again,” Barbee said.

The senior credited the team’s bench this year.

“You can be put in the game at any point, so we are always ready…you have these underclassmen coming in and proving they should be on the field as well.”

Having a strong bench is a comfort as well, Barbee added.

“Having those players that can come in and back you up” is great to have, she said.

It was Monday’s home game, however, which was the closest and most challenging for West.

Anson led 2-0 heading to the bottom of the sixth when Barbee’s RBI double and Ashlyn Hughes’ RBI sacrifice fly tied the game.

Sophomore Carmen McRae, younger sister of Rosalyn McRae, catcher of the 2019 title team, delivered one of the biggest hits of her career in the bottom of the ninth. Her walk-off two-run home run lifted West to the win.

Talking about the win, Barbee said it was a wake-up call leading into Wednesday’s win.

“We really expected to come out and do better than that. It put a little more drive into us,” Barbee said. “We always have something to prove because we have a target on our backs as the defending state champions.”

Carter talked about the final two games of the regular season for West and the future playoffs.

“(Monday’s game) will be a big rivalry game. I’m looking forward to that, too, because I know that will bring out the best in these girls…I feel like we are steadily climbing. We are inching our way, but I do not think we are anywhere near where we need to be.”