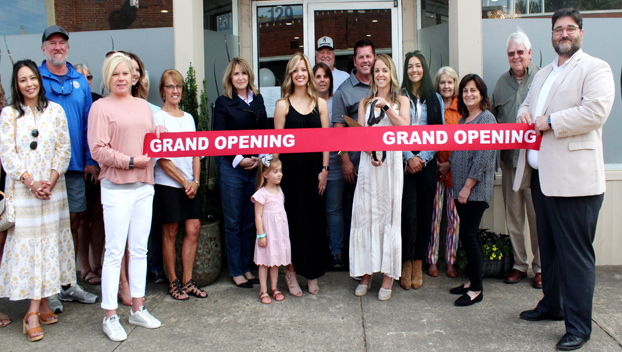 Michelle Bowers cuts the ribbon as the community celebrates the opening of her business in Norwood. (Photo by Charles Curcio/staff)

Mix the creativity involved with fitness disciplines and hair styling, and what you get is a new business in downtown Norwood.

The Color Barre at 129 N. Main St. looks to offer fresh ways to help people feel better about themselves.

How that happens will be through yoga, pilates and barre classes along with a full hair salon.

Michelle Bowers, co-owner of the salon, said she has been styling hair for 13 years.

When the opportunity to buy the building on Main Street came up, Bowers said she wanted to cut her hours back on doing hair to teach yoga.

“This is the way I can do that,” she said of the new combined business.

The process of making men and women feel better about themselves is what the new business is all about, along with handling anxiety and stress.

“(The new business) is a way we can make people feel beautiful inside and out, and that’s what we’re trying to do,” Bowers said.

Brandie Curlee, a hairstylist and yoga instructor, said hairstyling involves having a relationship with clients.

“Your goal at the end of the process is to make them feel beautiful,” Curlee said.

Classes at The Color Barre will cater to students of every level. Bowers said using modifications for students to match level is like finding the right hairstyle for a client.

Having grown up together, Bowers and Curlee both agreed they work well as a team.

More information on classes and styling appointments can be made by calling 704-459-0140.