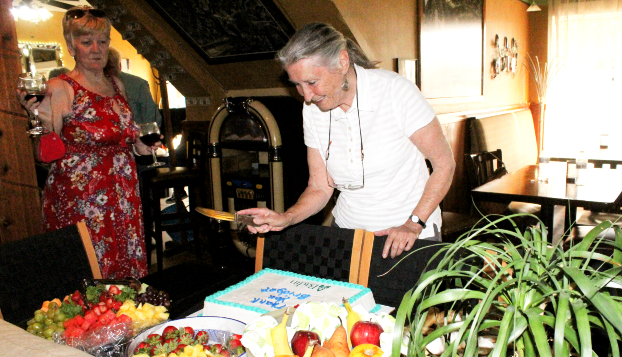 The town of Badin celebrated the accomplishments of one citizen Wednesday night who made it a goal to serve the community by keeping the public informed.

Bridget Huckabee, a native of Bournemouth on the southern coast of England, has spent the past 17 years as the primary editor and publisher for the town’s newsletter, The Villager. She recently gave the duties over to another writer in the town, Jo Grey, Badin correspondent for The Stanly News & Press.

A longtime resident of Badin, Huckabee was honored by the Better Badin Association for her time with the newsletter at a ceremony hosted by Badin restaurant and nightclub Loafers and Legends. Friends and family gathered to honor her along with Mayor Anne Harwood and Town Manager Jay Almond.

In his comments, Almond noted Huckabee’s writing has graced many publications over the years.

“(Bridget) covered many of Badin’s triumphs and tribulations. She set upon those endeavors with a fervor and commitment equal to that which informs the balance of her life: substance with style,” Almond said. “She publicly defended, with razor acuity, town officials who caught the brunt of misplaced sneers and ire. She did so with the incumbent dignity and propriety of an English lady.”

Harwood described Huckabee as “a fine spokeswoman and trusted advisor.”

She “helped me and helped to guide Badin in the right direction,” Harwood said.

She added Huckabee “helped start the vision we have.”

Huckabee called herself an “Army brat” in her earlier years who traveled to many places with her time in the Ice Capades, touring the United States and Europe.

It was on an Ice Capades tour in Germany where she met her husband, William Huckabee, who was serving in the armed forces. The two married, had a child and moved back to Stanly in 1961.

Huckabee served Pfeiffer University for several years as the director of its cultural credit program. She also has worked as a freelance writer and artist whose paintings have been sold at Falling Rivers Gallery. At her home near Badin Inn, Huckabee maintains a proper English garden.

Regarding the party in her honor, Huckabee said it was totally unexpected.

“When you come into Badin and it becomes a home, then you automatically do what you can for it. You don’t think about anybody recognizing you for it. You do it because you just love the place,” she said.

Badin is a special place, she explained, which accepted her.

“I was a Brit who drank tea and was a little different, but that was fine. I was home,” Huckabee said.

To be a company town, she said, explains the feeling of togetherness shared in Badin.

“You still have that feeling that everybody is in this together…and accepting of everyone. That’s still here,” Huckabee said.

Never one to be bored, Huckabee said there is always something to do in and around Badin, from the lake to Morrow Mountain State Park and in between.

Huckabee expressed confidence in Grey’s taking over the Villager, saying she has handed it to “somebody else who is going to be extremely good and is very competent.”

Still wanting to write more about Badin, as well as paint and keep up her garden, Huckabee said she is not retiring at all.

“I don’t believe in retirement…there is no such word in my vocabulary.”