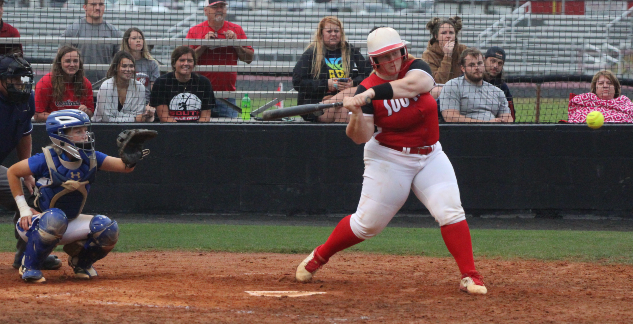 South Stanly's Holly Barrier delivers a hit for the Bulls in Monday's 13-0 win over Cherryville. (Photo by Charles Curcio/staff)

A big swing of the bat early in Monday’s first-round 1A state playoff softball game helped lift South Stanly to an easy five-inning win over No. 16 Cherryville, 13-0.

Seeded No. 1 in the Western Region, the Rebel Bulls (12-2) got a grand slam from Holly Barrier in the first inning after Ironmen starting pitcher Raegan Nowowiecki walked the bases loaded.

“We have to hit well and be smart on the bases so that (our pitchers) can keep their head up and do the pitching,” Barrier said.

She said the team bonded in practice where head coach David Poplin and the staff have worked them very hard.

“At the beginning of the season, we were kind of slow getting to the start. But as he’s been working us harder, we’ve gotten much stronger and much better,” Barrier said.

Freshman Mary Hinson added two RBIs in the third inning, along with an RBI double by senior Emma Crump. South’s starting pitcher, Sadie Lee, helped her own cause with two RBIs in a five-run fourth inning after the Bulls had built an eight-run lead. Cassie Swink drove in two runs with a triple in the fourth while Emma Campbell added an RBI groundout.

Lee threw five innings of one-hit softball for the Bulls, striking out eight while not issuing a walk. Only two baserunners got on base for Cherryville, the other coming on a fielding error.

“We’ve really grown from the first game and I expect big things from us to come and in the future for the following year,” Lee said.

She added she expects the team to make a run in the playoffs this season.

Having the No. 1 seed is nice, Poplin said, but all it means is South will not have to travel.

“The good teams are still going to do what good teams do…it is nice that we can play here in front of our fans in the COVID era,” Poplin said.

Poplin said he did not want to predict what the Bulls’ chances were in the playoffs. He added but said, “if we’re putting the ball in play like we did tonight and Sadie is spinning it like she did, we have a good chance.”

South Stanly will host either No. 8 Chatham Central or No. 9 Union Academy Wednesday night.