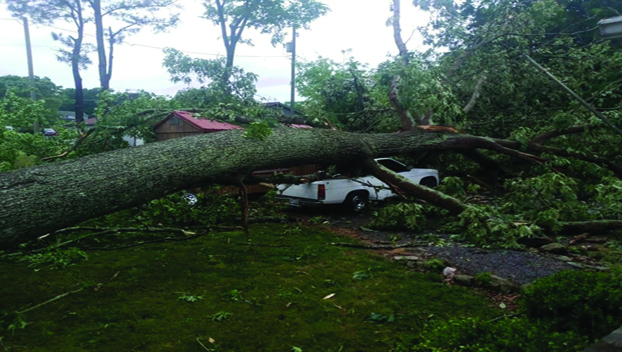 Damage is shown from Robert Williams' house near Oakboro Tractor.

Heavy storms and winds along with a brief tornado caused damage Monday in the Oakboro area.

Crystal Huerta, who lives on Sun Rise Lane, said her husband, Joshua Greene, looked out of their window at the storm from their home and suggested they check The Weather Channel on TV.

“Two seconds later, he went to the bathroom window and saw all the water being sucked up,” Huerta said.

Greene screamed at Huerta and their daughter to get into the closet. Seconds later, they heard the wind pick up and a big bang.

At their neighbor’s house, trees fell onto the house and the chicken farm as well.

Other damage in Oakboro included Tammy’s Restaurant, where trees fell onto the roof of the restaurant and an adjacent house. One tree blocked Main Street as well.

A trailer was overturned on St. Martin Road.

According to Police Chief T.J. Smith, no one in Oakboro was hurt. He said he had not heard of any serious injuries elsewhere in the county from the storm.