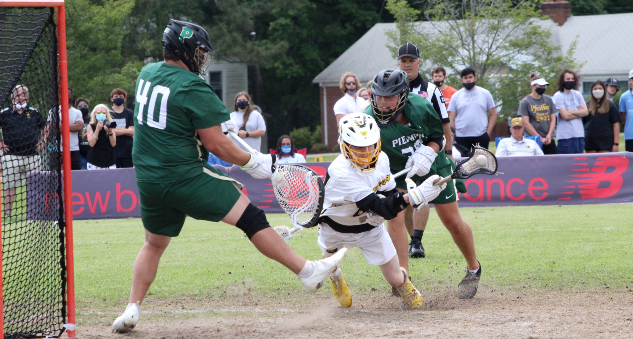 Making school history while also looking for the school’s first USA South Conference championship in men’s lacrosse was on the line Saturday afternoon in Misenheimer.

The Pfeiffer Falcons, champions of the East Division, hosted Piedmont College, the top seed from the West Division of the conference.

Pfeiffer (12-1) also earned the school’s first bid ever into the NCAA national tournament in its first season as a full Div. III school.

“It’s awesome,” head coach Tucker Nelson said about the program’s first trip to the tournament. “Our guys earned it from being in six inches of mud in February (to start the season).”

He credited the team’s upperclassmen “for coming in every day and never having a bad attitude. They just do what we tell them to do. They executed, and this is the result.”

One of those upperclassmen this season is the head coach’s brother, Jared, who as a senior recently set a national record for career assists.

Winning the title, Jared said, was the culmination of four or five years of effort by himself, his brother and the former head coach, his father Scott Nelson.

“We have a lot of dedicated players,” Jared said about the team.

The Nelson family has a history of playing lacrosse as Pfeiffer’s current head coach played at Binghamton while his father played for N.C. State. A younger brother, Jake Nelson, plays for LeMoyne, the top-ranked team in Div. II lacrosse.

Pfeiffer built a small lead early in the game but trailed 6-5 early in the second quarter. Coach Nelson called timeout and got on to his team for their play.

“We thought guys weren’t being tough enough at times…so I just challenged them (to play tougher),” Nelson said.

The motivation worked as the Falcons quickly retook the lead and never trailed Piedmont (6-5) for the rest of the game.

Jared, who had not registered a point by that timeout, finished the game with a goal and three assists.

“Other teams will put in some things to try to limit the scoring the way we usually do, but these guys did a great job (of picking it up),” Jared said.

Winning the school’s first USA South lacrosse title and earning an automatic bid into the national tournament for the first time in Pfeiffer history is huge, Jared added.

Further describing his teammates, Jared said, “they come into work every single day to do their job and do it right.

Corey Choberka was named the USA South Tournament’s Most Valuable Player and led the Falcons with four goals. John Allen and Quinn Becraft added three goals each for Pfeiffer, while Matt Stocks earned the win in goal for the Falcons making nine saves.

The men’s lacrosse championship was Pfeiffer’s first outright conference championship in the USA South Conference as a full Div. III member. Earlier this season, the men’s basketball team won the East Division title, but because of COVID restrictions could not play the West Division for a conference crown.

Pfeiffer will play at Lynchburg Saturday at 1 p.m. in the first round of the NCAA Div. III tournament.