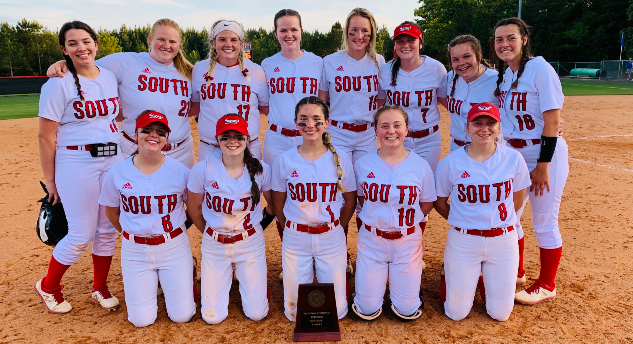 The South Stanly softball team claimed the 2021 1A Western Regional title with a 16-6 win over Mountain Island Charter. (Photo by Charles Curcio/staff)

Less than 24 hours ago, the South Stanly softball team had mustered just two hits and needed eight innings to top Alleghany in the third round of the 1A state softball playoffs.

The Bulls’ starting pitcher, Sadie Lee, had to turn around Tuesday night and face the Mountain Island Charter Raptors in the regional finals.

South’s offense scored early and often giving Lee the support she needed as the Bulls claimed a 16-6 five-inning win.

The Western Regional title puts the Bulls into the 1A State Finals Series for the first time since South’s last state title in 2012.

It was the long ball which did the damage for the offense of South Stanly (15-2). Senior Emma Campbell delivered two of the Bulls’ five homers on the night, including a two-run shot to open the game in the bottom of the first. She finished the game 4-for-4 with four RBIs.

Freshman Cassidy Smith, following on the heels of her solo walk-off home run last night, put South into the regional finals, added a two-run shot in a five-run second inning.

The other three runs in the second came off Lee’s bat after singles from Mary Hinson and Campbell.

Mountain Island (15-1) got onto the board with three runs in the top of the fourth, including a two-RBI double from Lawson Gerland.

South countered in the bottom of the fourth with an RBI sacrifice fly from Lee.

The Raptors continued to threaten in the fifth inning. Ali Glover relieved Lee in the circle to start the inning, but got into trouble. She struck the first batter out but a walk and three consecutive hits, including back-to-back doubles, got the visitors within two runs, 8-6.

Lee came back into the game and got a fielder’s choice along with a pop foul out to catcher Skylar Mauldin to end the threat.

South’s offense countered with eight runs in the bottom of the fifth. Smith drove in two more runs with a double and Campbell’s second two-run homer put the Bulls up, 14-6.

After Lee reached on an error, the Bulls’ cleanup hitter, Holly Barrier, ended the game with a towering two-run blast to center field. (Note: For video of Barrier’s home run, click here: https://youtu.be/tc81KaPSSig )

“We really did not want (the season) to be over, so we just told ourselves to keep our heads up and have quality at bats,” Barrier said about the team’s approach at the plate.

Campbell said she “went up (to the plate) with a blank mind…I wanted to hit the ball. That’s what helps.”

Keeping a simple approach, Campbell added, saying, “all you need is to make contact and hit the ball. That’s what I had going on in my head. I wasn’t worried about the spin of the ball or anything like that.”

“We were ready to play. Last night was the exception at the end of the spectrum. I had a good feeling about tonight and we put the ball in play,” Poplin said.

Conditioning for the team has always been key, he added, saying the team’s conditioning work “is almost extreme. Our thought process is that a lot of teams who play four or five innings don’t know how to get to seven, eight or nine. We do.”

Poplin said despite playing back-to-back nights with Lee a little tired, “we don’t fatigue. We don’t get tired. We just keep coming.”

South Stanly will face Camden County (13-0) in the 1A state finals starting Friday. The Bruins, seeded fifth in the East but ranked No. 1 in the state regardless of classification, advanced with a 5-1 win over Bear Grass Charter.

For South to succeed, Barrier said, the team must “keep the same mentality that we’ve had all year…hit the ball, have the defense back up everything and play our game.”

Campbell added the team “needs to focus on ourselves more than the other team that we’re playing. As long as we do what we’ve been doing, hitting the ball, making routine plays, making those extra plays every once in a while, I think we’ll be just fine.”

As far as having what it takes to win a state title, Poplin said he told his team exactly that after the Chatham Central come-from-behind win in the regular season.

“You can believe it or not. You can buy into it or not, but this is how this thing is going to go,” Poplin said.

The finals schedule will be announced Wednesday.