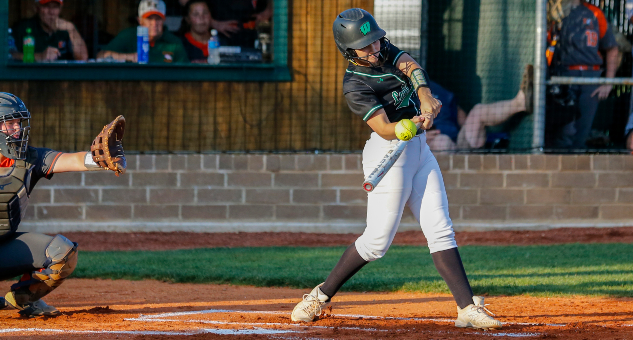 The Colts' Lily Huneycutt singles to right field in the first inning driving in a run in the 2021 2A Western Regional Finals Tuesday night. (Photo courtesy of Earl Bradshaw)

The West Stanly Colts’ defense of the team’s 2A state title continued on the road Tuesday night in the 2A Western Regional Finals at East Lincoln.

West got a stellar performance in the circle from standout senior Jordan Hatch and the Colts’ defense while pushing single runs across in the first and last innings for a 2-0 win.

The Colts (18-0), ranked No. 2 overall in the state by MaxPreps and No. 1 in the 2A classification, got a two-hit complete-game shutout from Hatch. The future ECU Pirate walked four for only the third time this season, but struck out nine.

The senior also said she wanted to throw a better game than in the previous game, when she allowed five runs. For the season, she has a 1.04 earned-run average and averages just over 10 strikeouts a game.

West got the early lead with a two-out rally. Shelby Barbee and Ashlyn Hughes both singled, then Barbee scored on a Lily Huneycutt RBI single to right.

“I just knew that we needed to score first, so I just tried to put the ball in play,” Huneycutt said. She added the pitch was right on her hands and jammed her inside, but she took the ball to the right side of the diamond.

“We know we have to get the first run so it helps Jordan to get a few runs to help her out and (get) the defense to chill out a little bit.”

The defense for West Stanly was solid, including an inning-ending double play in the fifth.

Another two-out rally in the seventh produced the game’s other run. Kaylan Little and Rachel Efird both singled, then Little scored on a Morgan Edwards line drive to right.

West Stanly faces one of the state’s most successful softball teams in the South Granville Vikings. South Granville has won 10 state softball titles, five slow pitch and five fast pitch including 2A titles in 2015, 2016 and 2018.

South Granville also entered the 2021 playoffs, having the third-most playoff wins in NCHSAA history in fast-pitch softball. The two teams met in the 2013 2A State Finals where the Colts swept the Vikings two games for the championship.

The Vikings are seeded No. 2 from the East and advanced with a 4-3 road win at No. 1 Currituck County in the East Regional Finals.