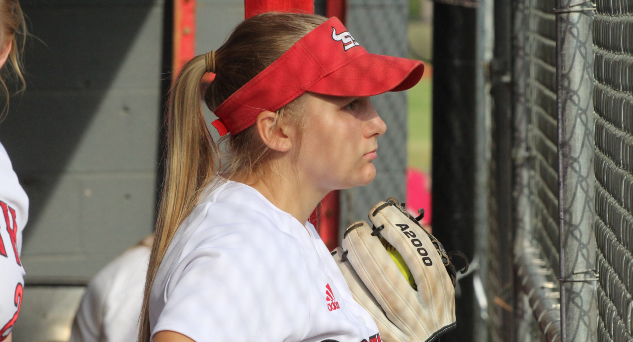 South Stanly senior Emma Crump focuses on the task ahead before this week's regional finals game. (Photo by Charles Curcio/staff)

This Friday, the South Stanly Rebel Bulls softball teams makes a return to the state finals for the first time since 2012.

South’s opponent this year will sound familiar to those who remember that series as Camden County will face the Bulls starting at 8 p.m. Friday.

The two teams play Saturday at 1 p.m. and if necessary a third game would be at 7 p.m.

These Teams Have History

Camden County first appeared in the state finals in 1A in 2001, winning in the semifinals but being eliminated before reaching the championship round of the round-robin double elimination tourney.

The Bruins again reached the state finals in 2004 but lost twice and were eliminated.

Camden’s team that season was the first athletic team in school history to reach a championship finals.

Rain delayed play at the Walnut Creek Softball Complex in Raleigh to Saturday, where the Bruins jumped out to a lead in the series with an 11-4 win.

South rallied to take the second game Saturday, 2-0, then claim the school’s second 1A softball title the next day with a 9-2 win. Steely Russell threw 14 brilliant innings in the final two games and was named the tournament’s Most Outstanding Player.

Current head coach David Poplin coached that championship team, while two of his current assistants were also part of the staff: Matt Little, along with Poplin’s daughter, Emily, who played on the 2012 squad.

Beware of the Bears

In the overall MaxPreps rankings, Camden County ranks first among all schools and the 1A class at 13-0 overall with a 33.7 ranking. By comparison, South Stanly is ranked 25th overall and fourth in the 1A.

Camden and South have things in common as well, including each having four seniors and positive contributions from underclassmen.

The Bruins are led offensively by a freshman, Carlyn Tanis, who is hitting .625 this season with 10 doubles, two home runs and 18 RBIs. Six Bruins have 11 or more RBIs this season.

Sophomore pitcher Morgan Brewton is 10-0 in the circle this season with a 0.78 earned-run average. Opponents this season have a .176 batting average against Brewton, who has issued 13 walks and struck out 72.

The Running of the Bulls

If South Stanly’s offense this season was like those running in Pamplona, very few have been able to escape the Bulls.

Harward and Lee lead South with 20 RBIs each; eight players have 13 RBIs or more this season. The Bulls have hit 42 doubles and 17 home runs.

South has outscored its opponents 160-30 this season including 43-7 in the postseason. Nine times in 2021 the Bulls have scored 10 or more runs, averaging 9.5 runs per game while allowing 1.8 runs to score.

Lee has also been clutch in the circle for the Bulls this season. The senior is 11-2 with a 1.33 earned-run average. Opponents are hitting .184 while Lee has struck out 79 batters to just 11 walks.

The Bulls only two losses this season were a one-run loss at Central Davidson and a 9-2 loss to the 2A Western Regional champion West Stanly Colts.

Poplin said the team was “upbeat and excited” going into the state finals. Rain gave the Bulls Wednesday off after back-to-back games Monday and Tuesday to qualify for the finals.

Regarding the finals, Poplin talked about all the team has already seen heading into the weekend.

The South coach added he did not know what to expect but said, “win or lose, I just want to play well and compete. I tell my teams every year that I don’t care if you win five games or 20…just compete.”

On how he wants his team to face the finals, Poplin said there may be more people at the game but the rules are still the same.

“It’s the same game; (the Vikings) are your age. You’re not going to see anything you haven’t seen. Just go play the game and do what we do best. Compete and we’ll be alright.”