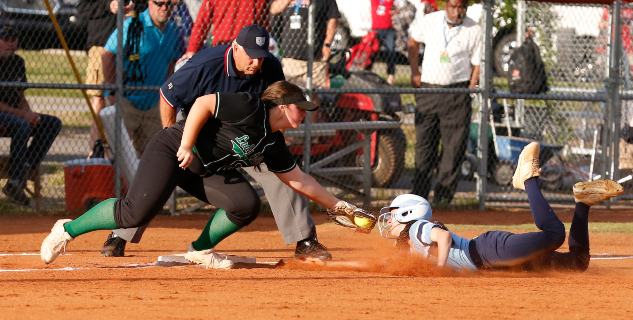 Meredith Harwood puts the tag on the Vikings' Maddie Gerouac for the final out of the opening game of the 2021 2A State Finals Series. (Photo by Earl Bardshaw)

Renewing acquaintances for the first time since 2013, the softball teams of West Stanly and South Granville met Friday night in the opening game of the best-of-three 2A State Finals Series.

Two strong starting pitchers kept runs at a minimum as the Colts earned a 3-1 win.

The Colts’ Jordan Hatch did not allow an earned run or hit in the game, out dueling the Vikings’ Brooke Bowling in the game. Hatch had a season-high six walks but struck out 12.

One of Bowlings’ wild pitches came back to haunt the Vikings (14-1).

West Stanly (19-0) got the lead in the top of the third. Rachel Efird led off with a triple to left field, then Morgan Edwards reached first on a bunt attempt. Efird later scored on a wild pitch for the game’s first run, moving Edwards to third.

“I knew we had to come out strong and keep the intensity up,” Efird said. “I knew if I didn’t start it, maybe it would not start.”

Efird, who finished with three hits in the game, added a two-out double in the top of the fourth but added a key putout from right field to first base in the bottom of the inning.

West continued to threaten with runners in the sixth inning on base but did not break through until the seventh.

Efird again led off an inning with a hit in the seventh, a double just fair down the left field line. This time, she scored when Edwards moved her to third with a sac bunt and Shelby Barbee sent the first pitch into left for a single, scoring Efird. Lily Huneycutt then drove a ground ball up the middle to bring Barbee home.

South Granville broke the shutout in the bottom of the seventh without a hit. A dropped third strike and two walks loaded the bases. With one out, Candace Strombeck sent a fly ball to Kailey Furr in center field.

Furr made the play and threw home. Barbee cut the throw off, giving up the run, but fired to Meredith Harwood at third base for the final out of the game.

Bringing experience from the 2019 team, Efird said getting the lead in the series was important. “There would be a lot of pressure on us if we didn’t come out with a win.”

The two runs at the end were good for West, head coach Craig Carter said, not just for winning the first game but for the rest of the series.

“It shows our girls we can hit (Bowling)….(though) she pitched a great game,” Carter said.

The West coach said Efird was “money” in the game, not just for the three hits but the putout at first from right field was “an inning killer.”

Carter also credited the Colts’ defense for an error-free game.

The two teams play Saturday morning at 10 a.m. If necessary, a third game will be at 4 p.m.