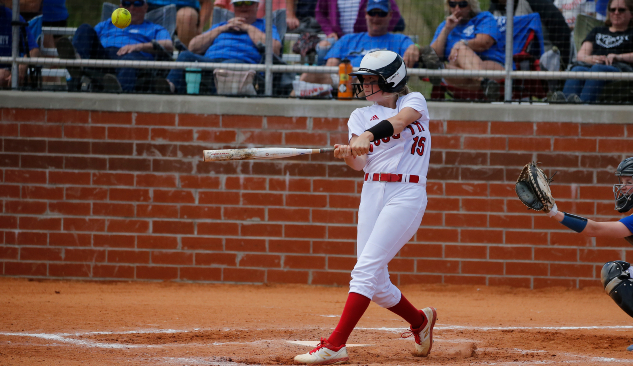 Cassidy Smith goes deep in the third inning for the Bulls in the second game of the 1A State Finals Series. (Photo by Earl Bradshaw)

The 1A Softball State Finals Series was extended to a third and deciding game Saturday afternoon when the South Stanly Rebel Bulls lost to Camden County, 7-2.

South Stanly (16-3) managed just four hits in the game against Camden (14-1_ starter Morgan Brewton, while the Bruins got nine hits off of Bulls starter Sadie Lee. The Bulls senior suffered just her third loss of the season in the circle.

Camden got out to another fast start in the game, scoring two runs in the top of the first. Kamryn Nash, who is verbally committed to James Madison University, led off with a triple and scored when Carlyn Tanis followed with an RBI double. Peyton Carver then singled to score Tannis and put the Bruins up, 2-0.

Three more runs in the third gave the Bruins a commanding lead. Nash reached on an infield sing and later scored on a dropped pop fly in the infield. Morgan Gallop later added a two-RBI double to put Camden up, 5-0.

A pair of solo home runs put the Bulls on the scoreboard. Cassidy Smith went yard in the third while Mattie Poulos drove a solo shot over the left field fence in the fifth.

The Bruins added two runs in the top of the sixth inning on RBI doubles from Sydney Tatum and Kensey Tarkington to put the Bruins back up by five.