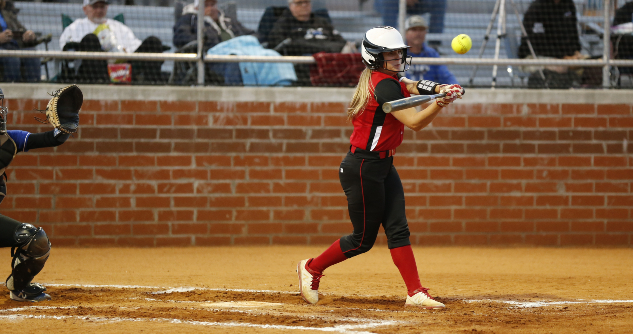 South’s offense rallied from being down twice in the game to take a one-game lead in the best-of-three series with an 11-5 win.

“I wouldn’t expect anything less,” South head coach David Poplin said. “They’ve been resilient all year. They came up here ready to play…it took them a little while to shake the nerves off.”

Mattie Poulos, who had three RBIs in the game including a solo home run, said her approach at the plate was “mainly to hit the ball hard and swing at strikes.”

Camden jumped out to an early lead in the bottom of the first inning with a sacrifice fly.

The Bulls immediately answered with Emma Crump’s RBI triple in the top of the second.

Camden’s Carlyn Tanis tripled home a run with two outs then scored on a passed ball giving the Bruins a 3-1 lead in the third inning.

South’s bats responded in the next two innings. Four hits in the top of the fourth, including a two-RBI single from Mattie Poulos and an RBI single from Mary Hinson, gave the Bulls the team’s first lead of the game.

In the fifth, Lee helped her own cause with a solo home run to center field.

The offense continued in the top of the sixth as South added four more runs. Poulos added a third RBI with a solo home run while Campbell drove in another run and designated player Holly Barrier drove in two more, putting the Bulls up, 9-3.

Camden got two runs back with two outs after hits from Nash and Peyton Carver. The next batter, Morgan Gallop, grounded a ball to shortstop which was mishandled, allowing both runners to score and pulling the Bruins to within four runs, 9-5.

South continued to score runs in the seventh as Campbell added two more runs with a double.

The two teams play at 1 p.m. in the second game of the series. If necessary, a third game would be played at either 4 p.m. (if the 2A series does not need a third game) or 7 p.m.