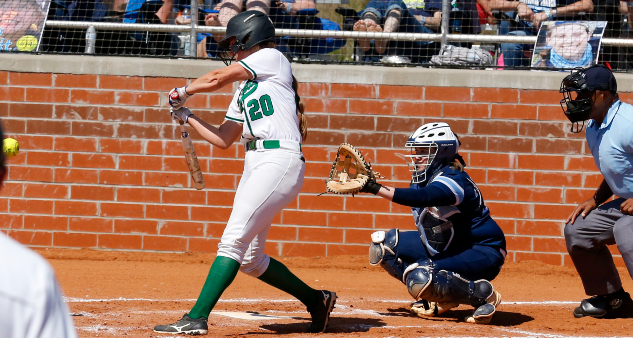 West's Shelby Barbee delivers the only run of the game, a solo shot to right-center field. (Photo by Earl Bradshaw)

With two future NCAA Div. I softball pitchers on the mound in the second game of the 2A State Finals Series between West Stanly and South Granville, another low-scoring game was practically a sure thing.

West’s Jordan Hatch, who is going to East Carolina, along with the Vikings’ Brooke Bowling, bound for Charlotte, battled each other the entire game.

One swing of the bat from West’s catcher was all Hatch needed as the Colts claimed the school’s second straight state championship and fourth in school history, 1-0.

In the bottom of the fourth, Shelby Barbee’s solo home run was the difference in the game. It was the only hit of the game for West (20-0) and the contest’s only run.

The senior pitcher said West’s defense “was amazing” in the series.

Savannah Thompson led off the top of the second with a ground ball between third base and shortstop, ending eight straight hitless innings pitched by Hatch.

West ended Bowling’s perfect-game bid with two outs in the bottom of the fourth with a line-drive solo home run over the fence in right-center field. It was the Colts’ 24th home run of the season and Barbee’s 12th long ball in 2021.

Going into the dugout before Barbee’s home run, Hatch said, one of her teammates piped up and said, “Someone’s going to have to score sometime.”

Barbee said going into the at-bat, she had struggled a few previous times against Bowling on outside pitches, including the opening game of the series.

Regarding the title, Hatch said winning two was good but said she believed the Colts would have won three if the 2020 season had run its full course.

West’s record the past four season is 76-4, with a 24-game win streak including three wins from the abbreviated 2020 season and the 2019 title-clinching game.

“COVID took (the 2020 season) away from us. (Our players) were determined coming back. I knew they were excited about this season, and they’ve showed it every step of the way.”

The two battery mates, Barbee and Hatch, “have been getting better and better the past two years,” Carter said.

West’s coach added the team’s defense “has done the work. They’ve backed (Hatch) up and made some great plays lately.”

Barbee said “going into the next generations, our legacy (players) are going to look up to us because we made such an impact on the program itself. Everybody’s going to want to win…and I think they’re going to have good success, too.”

Carter wrapped up the season by saying he was fortunate to win two state championships with this group.

“My heart swells with pride every time I get around these girls.”