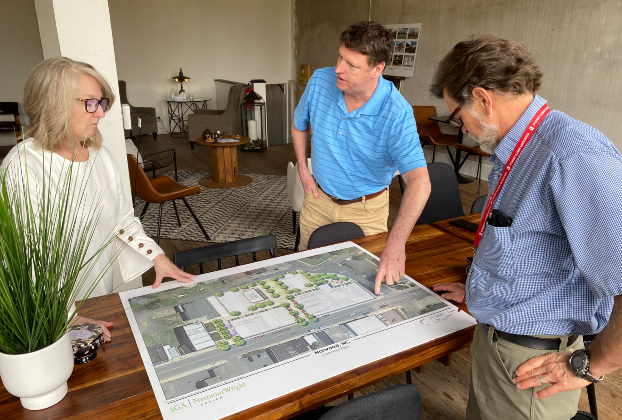 Robin Davis, Rick DeRhodes and Lee Snuggs examine the proposed rendering of what downtown Norwood could look like in a few years.

For much of Robin Davis’ life, Norwood offered a much-needed escape and respite. It was “the gateway to Lake Tillery,” as it’s described on the town’s website.

Her family would make the hour-plus commute from their Charlotte-area home a few times a year to their lake house, which was owned by her husband Norris’ parents.

Davis and her family spent almost all of their time on the lake. They gave little attention to the nearby downtown, since so many of its buildings were vacant and there wasn’t much to do. Aside from the lake, Norwood was easy to ignore.

But the allure of leaving the busy city life for the laid-back lake environment never lost its appeal for Davis. It only intensified over the years.

After Davis’ in-laws passed away, she and her husband Norris inherited the home and the time they stayed during each visit lengthened. Day trips quickly ballooned into weekend retreats.

“Several mornings we’d get up on the weekend and walk through the house and look at all the windows across the lake and think, ‘Oh my God, do we have to go home today?’ ” Davis said.

During one of her trips about three years ago, Davis changed things up and visited downtown. As she was walking along Main Street, she saw a vacant, spacious building for sale near the end of the block that quickly caught her eye.

“I thought, ‘Oh my gosh, this could be the coolest place ever,’ ” she said after taking a quick tour of the building; she especially loved the large windows on the second floor. “I fell in love with it.”

She dialed the number and talked to a man who, unbeknownst to her, was watching Davis from across the street. “Which one do you want?” he told her, as there were many empty properties.

After Davis inquired about rent, the man told her the town “just wants people to come (to the area).” She only later discovered the man was current town commissioner Robbie Cohen.

She eventually purchased the building, which now houses Reservoir Coffee and 110 Main Mercantile. She and Norris now have lived in Norwood for about three years.

“The vision for the building was to start creating community because there was no vibrancy downtown,” Davis said.

For Davis, the restoration of the building represents not just a key gathering place where people in the town can come together, but a jumping-off point for even more downtown renovations in the future.

Having established a footprint in the town and wanting to capitalize on the influx of people to the lake each year, Davis is now collaborating with several community members on a groundbreaking new project to inject life into Norwood’s downtown. This includes attracting new businesses and creating new outdoor space for people to enjoy.

In planning for Norwood’s growth, Davis wanted to see how Albemarle’s downtown had expanded in the past few decades to serve as a template. She connected about a year ago with Doug Burns, an architect who works at SGA/NarmourWright Design in Charlotte. He played a key role in helping revitalize downtown Albemarle in the 1980s.

Davis’ vision started with wanting more accessible parking to accommodate an increase in people coming to the farmers market each week. Davis and Burns met to discuss how to repurpose many of the vacant downtown buildings to enhance the market and other events in the area.

“They felt they needed to do something to liven up (the downtown) for more family activity…to go beyond just the farmers market,” Burns said.

A landscape artist with SGA/NarmourWright created a sketch of what Norwood could look like in a few years. According to the rendering, the Campbell Street Project — which would run from Norwood Hardware to end of the block — would be a roughly 180,000 square-foot courtyard-style, pedestrian-friendly area that would include a greenway, swing benches, outdoor dining, food trucks and parking.

While things will likely change, Davis said she expects the project to be completed in the next five to 10 years.

The Central Business District Group, which is a registered nonprofit Davis created last year, is partnering with the town to solicit funding for implementing the Campbell Street Project.

“The project provides a roadmap to redevelopment and focuses on revitalizing a key downtown corridor to support economic growth and increased tourism objectives in the town,” according to a news release. 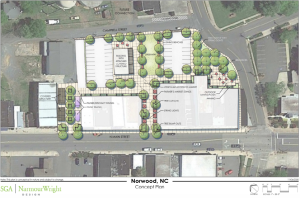 She first shared her vision about improving the downtown with Town Administrator Scott Howard more than a year and a half ago.

“It became evident quickly that the coffee shop in downtown was the hub (similar to the old country stores of old) of ideas, deals and the sharing of good ideas in Norwood,” Howard wrote in an email about the project. “People from the lake area would stop by for coffee and often state that they wanted to shop here and get involved with the community. However, the services and products they were seeking were not available.”

Davis later spoke with the town council about the lack of parking around downtown, especially along Campbell Street, for community events like the farmers market. The council directed a parking lot committee be formed to look into the issue. Davis, Cohen and Howard were members of the committee.

In the months since, the town has gathered input from many local and state officials, conducted an online survey, explored the North Carolina Main Street Program and assessed downtown assets.

A two-day revitalization workshop was conducted in late April by Construction Professionals Network Institute, a nonprofit group that works with small towns across the state, that included input from residents and county leaders, though there was no explicit mention of the Campbell Street Project.

“Robin and I considered all demographics along with a huge educational component directed towards underserved markets, and amenities that community members and customers wanted in Norwood,” Howard said.

He noted that five new businesses have opened in Norwood within past few months: Aimee Beauty Salon, the Color Barre and Yoga Studio, Minuteman Arms and Ammo, Heart & Saw by KCR and Fat Backs Soul Food and BBQ.

“Everyone we talked to loves it,” Davis said about the project. “Every community member that we shared it with is on board.”

A new restaurant coming to downtown

Another business is planning to move to downtown before the end of summer. Rick DeRhodes is working to open a sushi restaurant with the help of his son-in-law, who owns a restaurant in downtown Denver, Colorado, and is moving with his family to Norwood.

After visiting the lake over the years, DeRhodes moved there in 2019 from Charlotte.

The business will be at the intersection of North Main Street and Pee Dee Avenue across from Uwharrie Bank. DeRhodes bought the building from Davis last fall.

He hopes the restaurant — which will be called The Lantern, an homage to the name of Norwood High’s yearbook back in the 1940s — will be a communal gathering place and keep people from having to travel to other counties for good food.

“I love this area but quite honestly, if you want to go out to a nice restaurant…you almost need to either drive to Charlotte, Pinehurst or Greensboro,” he said.

While there are still moving parts, DeRhodes is just happy to be living in the town and doing his part to help revitalize the downtown.

“It’s a great place to raise a family,” he said about Norwood.