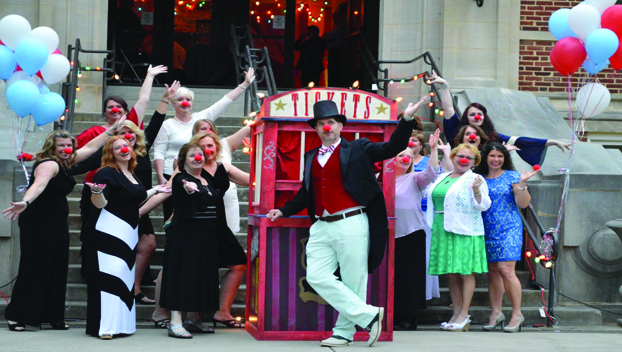 John Williams, center, often found himself as a prom planner, like when he was ringmaster for a circus theme in 2016.

In most high school classes, free thinking and creativity may not always be more important than the correct answer.

One North Stanly teacher who has reached retirement encouraged creativity in the lives of young people for three decades.

Williams was recently named Teacher of the Year at North Stanly High, where he has taught for nine years. He spent 10 years teaching art at West Stanly High and the other years traveling between various schools in the county.

In part, his retirement comes after a former student of his, Stone Russell, graduated college and did his student teaching with Williams, while further applying for his position at North Stanly. 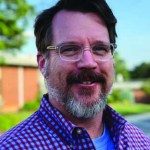 “I thought it was a good time to step away and do something new,” Williams said.

Teaching art to students has been a lot of fun, he said.

Some of Williams’ students, he said, came into his classroom not knowing they could draw, but they left his classes realizing they could. Former students are in artistic fields such as design, graphic arts and architecture.

Williams taught students of all ages during his 30 years with SCS from kindergarten to high school. In his first seven years, teaching K-8 students, Williams said it “was a whole different experience” from high schoolers.

“Those kids are sweet…the little ones will see you somewhere or in school, wrap their arms around your legs, and tell you they love you,” Williams said.

The high school kids are more like adults, he said, so the relationship is different, but “still a good one.”

Younger art students, Williams said, normally create art and do not really care what people think about it.

“They’ll hold up something that’s just a bunch of lines and colors and has this really detailed story about what they see in that picture, which is fascinating,” Williams said. “They’re innocent and unfiltered.”

Older students are more self-conscious about their work, but sometimes you have that high school student who is as enthusiastic as a young child.

Like many students who excel on the artistic side of life, Williams was not a bad kid, but he was not a good student on the other side of education, like math, spelling and so on.

“I hate to sit down all day long and all the stuff you need to be a good student,” Williams said. “Art is what got me through school.”

Beyond the confines of New London Elementary and North Stanly High, Williams’ parents used art as a reward for school work. He took lessons from Eltis Burleson who taught in a house on Fourth and Green streets in Albemarle, behind what is now Five Points Public House.

“On Wednesdays, I would go to her house with like five or six other kids and paint for a couple of hours,” Williams said. “That was my motivation to do what I had to so I could go paint…it was my saving grace.”

The teacher said he believes the arts, including music, theater and dance, are so important for kids.

Art, however, was not something his family thought he could make a living doing, especially before the computer age.

“I thought you just had to paint or be a sculptor, and there was not a lot of money in that,” Williams said.

After graduating from North in 1986, where he was taught by former South Stanly principal Robert Patterson, he went to work for Allison Manufacturing instead of going to Wingate for school.

“I decided I was not going to college,” Williams said.

When computers took off, other workers were laid off. Since he was the youngest at the facility, Williams thought he was going to be laid off.

Instead, his boss told him he was not on the layoff list, but she was going to lay him off anyway because he could not advance in the company without a college degree.

“She said, ‘I’ll hire you back every summer until you graduate,’ so I went to Wingate,” Williams said.

His parents, whom he described as “practical people,” insisted he double major at Wingate in art and education. Williams got a teaching degree but said initially he never planned on teaching.

“I kind of fell into (teaching) by mistake,” he said.

The Chance to Teach

After graduating from Wingate, Williams said he would end up teaching because of a girl he was dating whose mother was a principal.

Wanting to work in Manhattan for Allison, Williams took the teaching job while waiting for a job offer.

Two or three years later, he met his wife, Nicole, but then got the job offer he had previously wanted. Instead of taking the New York job, Williams went to work for former Albemarle mayor Roger Snyder and helped design The Boardroom.

The long hours of working on the project, along with the birth of his first son, Jack, got him back into teaching.

Williams said he always introduced himself each semester to students by telling them about his own background in art and what it meant to him as a young man.

“I told them I was a weird kid that people made fun of because I was different…some of my favorite kids are ones other teachers don’t like,” Williams said.

He added those students who other teachers dislike “are freaking creative.”

It Runs In The Family

Williams is far from being the only artistic person in his own house or family.

Both of his sons, Jack and Eli, are artistic in unique ways, he said. Jack, whose work can be seen on a building next to the Stanly County Arts Guild gallery in Albemarle, tends to be more abstract in his work. Eli excels with portrait art.

Along with his sons, Williams said his maternal grandfather, Sam Harrington, was creative and could draw, along with his mother Peggy Williams, his sister Sheri Carter and several nieces and nephews.

“I was kind of hoping both my kids would draw…they are amazing,” Williams said.

As a senior advisor at North, Williams said he will miss working with those students, along with chaperoning trips to New York, the Biltmore House in Asheville and the state fair in Raleigh.

He said it is a sad time to leave since the previous and current senior classes did not get to take those trips.

Williams said he looks forward to this Friday’s graduation since Thursday’s practice will be the first time the entire class will be together in the same place. The retiring teacher will also give the commencement address for North.

However, Williams is not through working at all. Having passed state real estate exams, he will work as a licensed realtor with Larry McGuire Realty.

He will also continue doing restoration projects in town and artwork as well.

“I’m really not retiring like going to sit on my front porch and rock every day,” Williams said.

He reflected on teaching saying, “it’s been a good career.”