The Badin Inn in 2020 is open again as a hotel and event venue. (Photo by Charles Curcio/staff)

Like any good dramatic story in which a protagonist rises and falls with the times, so has one of the oldest establishments nestled into a northeastern corner of Stanly.

With roots going back to the early 20th century, The Badin Inn has survived through wars and business struggles but has new life and purpose while still maintaining many of its rich traditions.

The Badin Inn first started in 1913 when a French aluminum company, L’Aluminum Franciase, built a club and guest house for its employees, which was later sold to ALCOA at the beginning of World War I. The building was completed a year later.

ALCOA added rooms for teachers at the local school which could be rented for $34 per month with three meals a day included but no air conditioning.

Many of the rooms inside the Badin Inn to this day harken back to the vaudeville days when the Badin Opera House, built in 1918, garnered stars such as W. C. Fields and Mae West, of which the suite named for her can be rented. 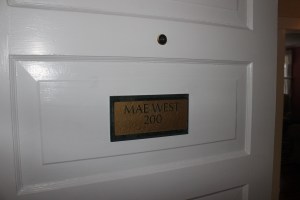 As a golf course, the first club was organized in the summer of 1924 with land donated by ALCOA. A total of 15 golfers soon grew to 21 as the course went from three holes to four. The next year, at a cost of $426, the course grew to nine holes and had its first real tournament on Thanksgiving Day. By 1926, the club had its first meeting and eventually became the Stanly County Country Club.

Tragedy struck the club eight years later when a fire in December 1934 damaged the clubhouse. From that point, the clubhouse was used mainly as a caddy house in the basement.

Many golf professionals have worked at the country club, including pro tour golfer Johnny Palmer, who won eight times on the PGA Tour and competed at the Masters Tournament in Augusta. Future jazz saxophonist Lou Donaldson worked as a caddy growing up in Badin, sometimes caddying for Palmer.

The Inn would be remodeled to add a pro shop and snack bar, the latter of which grew into the Johnny Palmer Grill which operated for many years.

As the golf industry suffered setbacks, the country club and Inn fell upon some tough times.

Stanly County Country Club had stable membership in the 1980s and 1990s offering private memberships for the golf course, pool and tennis courts, hosting events in the ball room for members and non-members.

Eventually, the country club stopped its operations in the late 1990s to early 2000s and the Inn itself did not function as a hotel until the mid-2000s.

Golfers could still play the course a few years later, but a shutdown of the course was in its future.

Badin Inn closed as a golf course for the first time in August 2017 when the Stanly News & Press reported the course had been closed with a sign in the window and no notifications to the club’s members.

New owners changed the name to the Historic Badin Golf Resort and Inn the next year, but also were gone approximately two months later. Bankruptcy reverted the company back to its original owners.

The course, which had not been maintained well, was then sold to Newport Landowners Services. The company, based in Richfield and New London, mostly dealt with timberland but with Badin Inn marketed the property to find new ownership.

However, the property’s life as a traditional golf course was over.

Looking for stable ownership of Badin Inn, two local women decided they wanted to help preserve history while also starting their own business.

Vanessa Mullinix, and her daughter, Jennifer Owens, became interested in Badin Inn while as residents watching the property “deteriorate before our very eyes.” 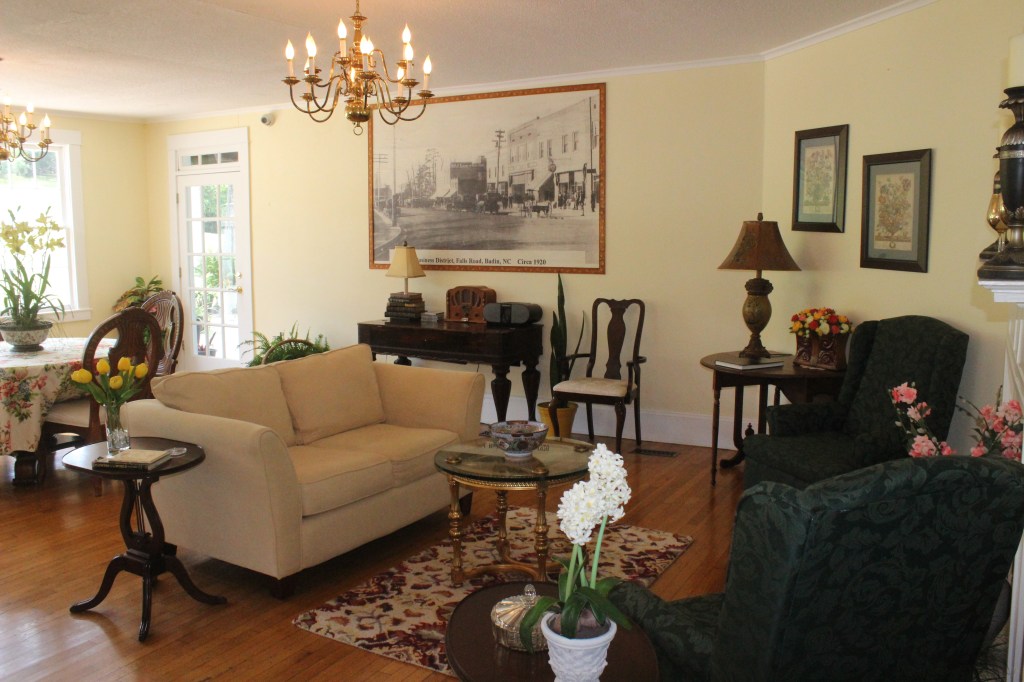 Owens said many of her memories, along with many others in the community, were of having special events at the Badin Inn. From high school proms and weddings to holiday office dinners and other private events, Badin Inn had “positive memories” for so many.

Beyond memories, though, was a chance for Owens and her mother to work together to build a business, with both having an interest in event planning.

“We could bring a life back into this building that had been forgotten,” Owens said of her family’s interest.

The family bought the three buildings of the Badin Inn and have leased much of the former golf course area near the buildings.

“We wanted to revitalize a piece of Badin and Stanly County history, but (it was also) an opportunity for a mother and daughter to work together and build a business,” Owens said.

Owens spent many years in the corporate world working for Fiberon. She said she was grateful for all of her years working there, but she wanted to work somewhere to build a legacy for herself and her family.

Redoing the inside was not as bad, Owens said, as getting the outside of the property ready, painting all the columns adorning the porches of the Inn and some structural repairs to the rooms.

“We always saw the diamond in the rough,” Owens said, noting the building’s construction in 1913 was “better quality construction than what you would get today in certain cases. “There were definitely moments where it all seemed daunting. It’s such a big place.”

However, the family’s motto has been to fix the place up one problem at a time.

“Our motto has been, ‘Every day we chip away,’ ” Owens said. “We never felt like it wasn’t doable. It’s just hard work, and we’re not scared of hard work.”

The new 1913 Badin Inn was able to host some events such as a jazz ensemble before the COVID-19 pandemic forced the shutdown of indoor events in the spring of 2020.

“We’re not doing great because we can’t have our big events,” Mullinix said, “but we still have our nose above water. (Operating as a hotel) has been what has been keeping us above water.”

Another struggle for the family has been to keep the restaurant open, both because of the pandemic and trying to keep the space leased. However, Owens said the long-term goal for the restaurant is to be open for three meals a day, seven days a week.

Ecotourism has always been a focus for the new owners, but with the world slowly reopening due to the pandemic, 1913 Badin Inn will be a place for people to get away for the weekend.

Bookings are available on many major sites including booking.com, AirBnB and Vrbo. 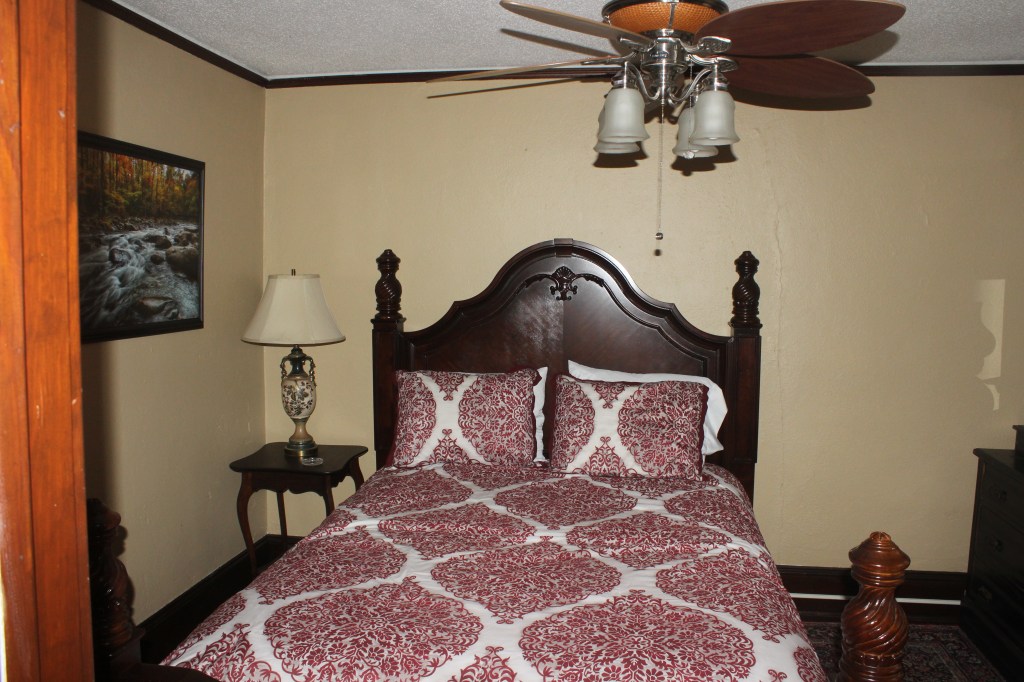 One of the bedrooms at the Badin Inn. (Photo By CHARLES CURCIO/staff)

“People are trying to get out of the cities, to a quieter, more secluded experience,” Owens said. “We have very clean, spacious rooms. We have walking trails in the back that people can enjoy.”

With the inn located less that 10 minutes away from Morrow Mountain State Park, inn guests are close to canoeing, kayaking, hiking and more activities, once they are open fully. Guests may also be able to enjoy vineyard tours set up by the Inn, Owens said.

“When people are looking for a getaway, they are always impressed to find this little treasure tucked back in the village of Badin.”