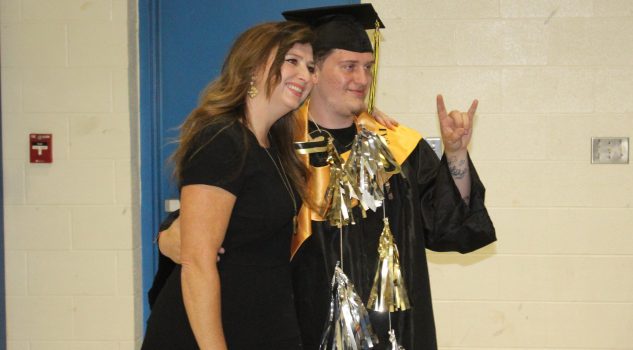 In front of a crowded gymnasium on the Stanly Academy Learning Center campus, 12 students graduated at Friday’s graduation ceremony.

Principal Natasha Krueger asked graduates to take a moment and look around at the people in attendance. She referred to the SALC faculty and staff along with Stanly County Schools’ staff, school board members and friends and family members of graduates.

“There is a good chance everyone in here has played a role in helping you reach graduation day, whether you know it or not,” Krueger said.

Tierra Littlejohn, who earned the Student of the Year award, spoke to her fellow graduates and family, thanking teachers and staff for supporting her “even on my bad days. You all helped me with my work when I needed help and were patient with me until it was done.”

McKayla Robinson, whom Krueger named as the Principal’s Award winner, also spoke at the ceremony. Robinson, who spent much of the year off campus taking college courses to become a certified nurse’s aide, said her daughter was a big motivating factor for her high school career.

“I’ve worked so hard to get to this point so I can provide us with a better future,” Robinson said. “I’ve had many moments when I didn’t think I would see the day I would graduate, but here I am before you.”

Robinson said to her fellow graduates, “from here on out, you have to be your own motivation, your own supporter. You be who you are. Don’t let anyone tell you any different.”

SCS Superintendent Dr. Jarrod Dennis, as the keynote speaker, said students were at graduation “because you were able to persevere through difficulties in your educational journey and through your life.”

The other award of the ceremony, the Eagle Award, was given to Scott Leonard. Chosen by SALC staff, the award recognizes a student who has to overcome various obstacles in order to achieve their goals. Leonard, Krueger said, “walked to school every day and did what had to be done…his perseverance is commendable.”

Graduates then were presented their diplomas from assistant principal Dr. Andrea Russell.