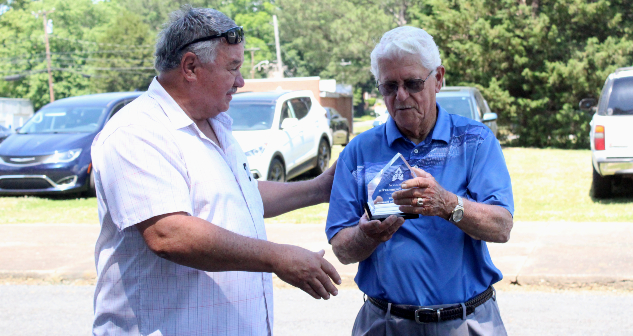 Friends of the Badin Museum Co-President Dale Ward (left) presents museum creator David Summerlin with an award for his achievements in the museum's creation. (Photo by Charles Curcio/staff)

Badin residents took a moment recently to honor one of their own for his contributions to keeping the town’s history alive.

David Summerlin was honored as the founder of the Badin Museum, which now includes four buildings.

At an open house event, Summerlin received an award recognizing his work in founding the museum. A plaque bearing his name was also placed on the outside of one of the four buildings, the Badin Firehouse Museum.

Dale Ward, co-president of the Friends of the Museum Committee, presented the award to Summerlin.

Ward said the Badin Historic Museum “all falls back to one person,” referring to Summerlin.

Summerlin said “a lot of people helped me” construct the museum complex. He mentioned Jerry Hall and himself dealing in antiques as being from where many of the museum’s items came.

Having lived in Badin since 1941 when he was 3 years old, Summerlin was part of the final graduating class who used the old Badin Theater for commencement exercises.

Originally, the Badin Museum served as the rental office for the Tallasee Power Company before becoming a kindergarten school and community building.

ALCOA donated the building with a condition of it being moved to its current location on Falls Road in what was the Badin Memorial Park.

The initial museum opened in 1999 and has memorabilia from the old Badin Theater including show bills and photographs, harkening to the Vaudeville days of Edgar Bergen and Charlie McCarthy.

Artifacts in the first museum chronicle the town’s history from the nearby Hardaway archaeological site through the days of L’Aluminum Francaise, which later became ALCOA, to current times.

Summerlin also built the Badin Firehouse Museum to house a 1937 Badin fire truck which he saved from being sold in the mid-1990s. History buffs visiting the Firehouse will see items such as the town’s old telephone switchboard to items from Badin High School, including basketball and cheerleading uniforms and more.

The museum complex also has the 1913 Apartment which depicts life from that time with authentic furniture, antiques and fixtures. Some of the furniture came from the estate of long-time Badin resident Alva Hawkins.

A gazebo near the museum was built in 1997 as well.

At 84, Summerlin said he has plans for more expansion of the museum including using the current vacant part of the lot to construct an exhibit on the Hardaway archaeological site.