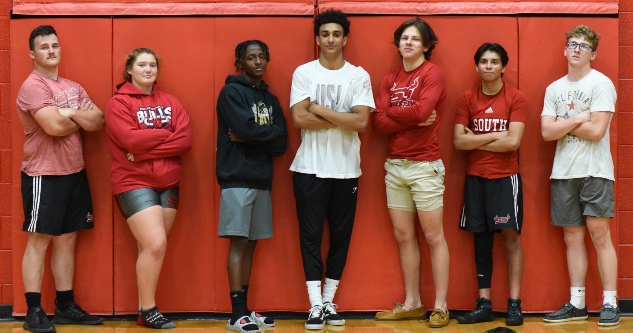 The South Stanly wrestling program graduates a strong senior class this season from the Bulls who finished second in the Yadkin Valley Conference.

Many of South’s seniors are expected to qualify for regionals this season, which will be announced June 14.

Chris Ramirez, wrestling at 113 pounds, “is one of (South’s) most dedicated and hardest working wrestlers,” head coach Michael Curlee said. “Not only does he work on the mat, but also excels academically.”

Included in this year’s group of seniors is Jaquavius Caraway (132). A three-time state qualifier who has placed in the top four every year in regionals, Caraway also joined the list of South wrestlers with 100 career wins.

Trent Drake (160 pounds) won a regional title last season and was fourth in the state. He also plans to wrestle in college.

Hunter Barrier (170 pounds) is another wrestler who had previously joined the school’s 100-win club, placing third in regionals and fourth overall in the state in the 2019-20 season.

Landon Greene, at 182 pounds, also started wrestling his sophomore year in school. Curlee said Greene “has always been willing to fill into our lineup wherever we need him.”

Tony Rogers, wrestling at 220 pounds this season, placed second in the regionals and fourth in the state last season. This is his third season with the Bulls after he started wrestling in his sophomore year.

On the women’s side, Savanna Hurley will be wrestling at the women’s state invitational set for June 19. Another third-year wrestler for the Bulls, Hurley was one match away from placing in last season’s women’s invitational.

“To have such a strong group of seniors this year considering the difficulties of conducting sports with COVID restrictions is a blessing,” Curlee said about his seniors. “If anyone would have asked me three months ago if we would be wrestling this year, I would have told them no. I honestly did not think we would be able to get wrestling in.”

Curlee said he was thankful his seniors were able to wrestle this season. Last year, wrestling season finished just before the pandemic hit in March.

“To put in the years of hard work and to not be able to enjoy a senior year of wrestling would have been a horrible experience for them. As a team, we enjoy every day that we get to continue moving forward and allowed to keep wrestling. I know the seniors are excited to get to the regional and state tournament to put the final exclamation mark on their careers.”

The one-day regional tournament will be June 15 with the state finals set for June 26.