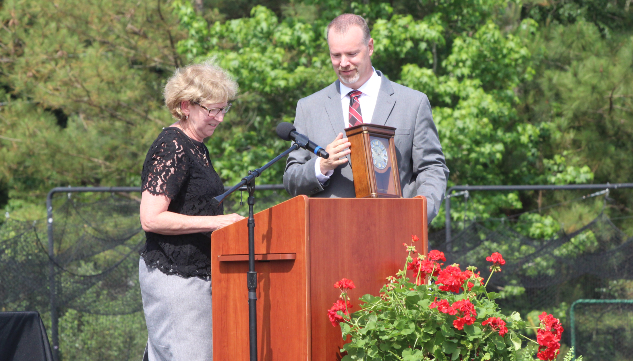 Along with the 87 graduates of the Gray Stone Day School Class of 2021, one member of the staff leaving the school was honored.

Gray Stone Chief Administrative Officer Helen Nance presented Stack as the honoree for the Gray Stone Board of Directors Scholarship. Nance gave Stack a clock to commemorate the honor as a staff member “who has supported the school in special ways during its growth.”

As the women’s basketball coach, Stack turned the program into one of the most successful teams in the school’s history, posting a string of six straight seasons with 20 or more wins including a school record 25-2 mark in 2019-20.

Regarding his efforts as middle school principal, Nance said Stack guided the school “through many growing pains to become one of the top performing middle schools in North Carolina.”

In one of his last acts as a staff member, Stack spoke to the Class of 2021, the 17th graduating class in school history, along with staff and families in attendance on the soccer field. Stack had coached the women’s basketball team since 2007 and joined the staff full time as a history teacher in January 2010.

Reflecting on his own graduation, when storms forced a week’s delay, Stack talked about being prepared.

“No matter what plans you have, sometimes you can change them. Sometimes other forces change them, but your preparation will always get you through,” Stack said.

“When the storm comes, you will survive it.”

Stack also encouraged graduates to not allow your favorite things in life to prevent you from finding new favorites.

“The world is a wonderful place. There are so many opportunities and places to see and things to do. And the most cherished moments of my life are those experiences; some that are planned, some that didn’t work out like I thought, and some that are spontaneous. So go out (and) seek new experiences. Never settle; don’t hold yourself back,” Stack said.

Belief in yourself, he added, does not mean things will work out the way you want them to work out. That belief, however, “gives you the opportunity that when it does not work out that you still can get through.”

Stack later gave fist bumps to each graduating senior when diplomas were handed out.

Edison Joseph White was named the winner of the $1,000 Board of Directors Scholarship. White played three sports at Gray Stone (cross-country, track and basketball) while also serving as president of the school’s National Honor Society and being a member of the Spanish National Honor Society. He will attend UNC-Chapel Hill in the fall on a pre-med track.

Nance also mentioned the Class of 2021 came from eight counties: Stanly, Rowan, Cabarrus, Montgomery, Mecklenburg, Union, Davidson and Randolph. Of the senior class, 97 percent are going on to college, having earned more than $1.4 million in scholarship funds.

Gray Stone’s seniors also provided more than 1,500 hours of community service in their senior service projects as part of requirements for graduation.

Nance also awarded $250 to each graduating senior to help with their educational opportunities. Nance said money budgeted for traditional events like dances and other social gatherings was not used in the COVID pandemic, so the money was awarded to seniors.