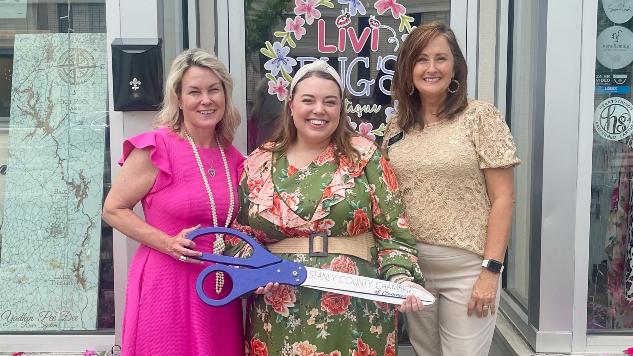 One recent employer of a new Albemarle downtown business owner is a famous mouse rapidly approaching his 100th birthday.

With much of the inventory from the previous Lah-Ti-Dah Boutique, the new business was opened last month in downtown Albemarle by Phillips and her mother, Mandi Rogers.

She started posting her fashion choices on social media in September 2019, where her influence started growing.

“I was not seeing a lot of plus-sized outfits, influencers or figures in social media, or any media for that matter,” Phillips said.

Phillips said she would receive compliments on her outfits she wore, and wanted to share that with her followers.

“From there, it just kind of took off,” Phillips said.

The key to being an online influencer, she added, is to post daily, which is what she does with whatever outfit she is wearing that day.

Her husband, Adam, would take her picture before she went to work for Disney in guest services, which helped her grow her online presence. Her duties at Disney went from handling emails and phone calls to working with the company’s presence on social media.

Phillips now is a brand ambassador with brands such as Aerie, Vera Bradley, Lane Bryant and others showcasing their products.

On her Instagram profile, Phillips states “all bodies are beautiful bodies” as part of the body positivity movement. It is a social movement which seeks to empower individuals no matter their size or weight, according to Wikipedia.

“It’s been really awesome to get to share fashion for people who I feel like fashion isn’t made for,” Phillips said.

“I definitely know that you can’t just walk into any store and expect to find your sizes.”

Livi Bug’s Boutique will have plus-size clothing for women along with many items from the previous store, like Pure Vida jewelry.

Recent additions to the store include locally made gifts and items along with a men’s section. Items across the store range from spa items to handbags and accessories, candles and more.

“We want to just have a place where you can come in and literally, for any person in your family or friends, any event or occasion, you can find something,” Phillips said.

The items in Livi Bug’s are not ones shoppers at chain stores would find, she said.

“That’s what I love…you can come in and find something for anyone in your life.”

A native of New London, Phillips graduated from Gray Stone Day School then earned an English degree from Campbell University. Her internship at Campbell helped create her job opportunity with Disney.

Phillips and her mother both decide about issues regarding the store as the two both worked together to get the story ready for the public.

The new owner got emotional when thinking about starting the business with her mother after spending years away in Florida.

“It’s just emotional to think about it all came together, for me to move back and us to get this opportunity,” Phillips said.

The new boutique is a “women-owned” business, she added, with a powerful bond between herself and her mother, “and we’re very proud of that. I couldn’t have done it without her…it’s the biggest blessing.”

As far as her online presence, Phillips said she wants grow past 10,000 followers on Instagram while continuing to represent plus-sized women.

She also said she is working on a building a website and having the ability to ship items to customers.

“The community I’ve built through social media has been so supportive.”