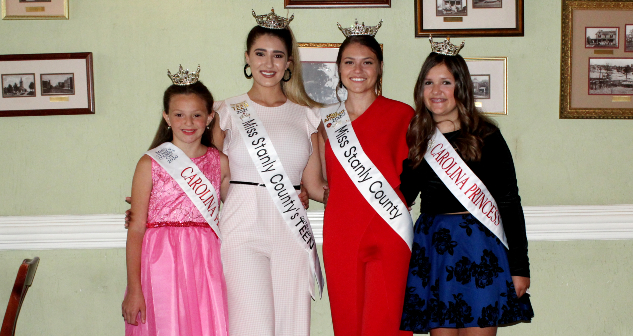 Stanly County will be represented in the scholarship competitions by two young ladies who leave Tuesday to compete in High Point. Preliminary competition opens Thursday, with the finals set for Saturday for the 83rd Miss North Carolina competition.

Winners from around the country, including the future Miss North Carolina, will compete for what will be the 100th Miss America competition.

Hosted by Tiffany’s at the Boardroom, Shields and Sides modeled the outfits which both will wear for the rounds of competition. Rounds include the talent competition, where Sides will perform a dance and Shields will sing “Somebody To Love” by Queen.

Wes Tucker, the drama teacher at West Stanly and long-time supporter of the Miss Stanly pageant, served as master of ceremonies for the preview. Tucker interviewed both contestants to allow them to practice speaking about their social impact statement, formerly known as a platform.

Shields is a West Stanly grad currently attending Pfeiffer University. She plans to earn a bachelor’s degree in health and exercise science and receive receiving a doctorate in physical therapy. Shields has advocated for the American Red Cross, a close cause for her. When her family suffered a fire in their home, she said, the Red Cross was there to help.

“(The Red Cross) was there to help every step of the way, making sure we had food, shelter and health services,” Shields said.

The reigning Miss Stanly County organized a stuffed animal drive for children whose families are assisted by the Red Cross. In her statement, she said the number of stuffed animals collected nearly filled an entire room. She noted one Stanly family affected by a recent tornado picked up stuffed animals as they were brought in.

After the event, Shields said being Miss Stanly County in the COVID-19 pandemic was a challenge in terms of putting one’s social impact out into the community.

“How am I going to reach out to the community in a way that’s going to benefit them?” Shields said she asked herself.

Coming out of that question was the stuffed animal drive for children being helped by the Red Cross.

Sides, who won in 2019 in the first pageant in which she ever competed, is studying Business Administration at Stanly Community College after graduating from North Stanly.

Her stance is anti-bullying, something she suffered while in school. Sharing that private struggle was not something she did before becoming Miss Stanly Outstanding Teen, she said.

“I’ve never really shared my story. I never really thought anybody cared to hear about it,” Sides said. “When I was given this amazing opportunity, I just knew that’s what I had to push. I knew it would give me this amazing drive…being able to do it based on life experiences I’ve had has really helped me a lot.”

Sides has been organizing “One Word, One Second” clubs at local schools and was a member at North Stanly of an anti-bullying club. She came up with the phrase meaning “it only takes one word to hurt somebody and one second for a reaction that can’t be undone,” she said.

“It stands for a lot more than just a broad anti-bullying statement,” Sides said.

The phrase signifies what could happen in just one word or one second, she said.

She said the clubs stand up “for people going back and hurting themselves or taking their own lives out of this world.”

At the preview, both winners were accompanied by their Carolina Princess. Chaney Kate Little is the princess with Shields and Aubryn Hill is Sides’ princess.

The event was coordinated by Kim Page, the former principal of West Stanly High School who is now the executive director for the Miss Stanly County Organization.

Page said she learned so much about Miss Stanly County when her daughter, Mackenzie, was Miss Stanly Outstanding Teen in 2018.

“When they needed an executive director and asked me, I didn’t want to see (the organization) end. I wanted to keep it going,” Page said.

Taking part in Miss Stanly County helps build character, the director said, adding “when they win this kind of thing, they truly become role models in their community.”