Stanly track and field athletes qualify for 1A state finals 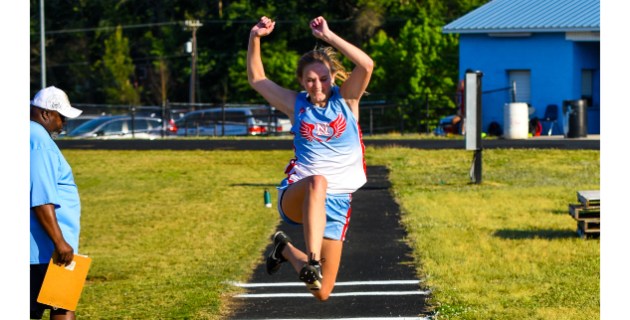 North Stanly senior Taegan Lowder flies through the air at a track meet at North this season. Lowder won two regional titles at the 2021 1A Midwest meet. (Photo by Dawn Lucas) 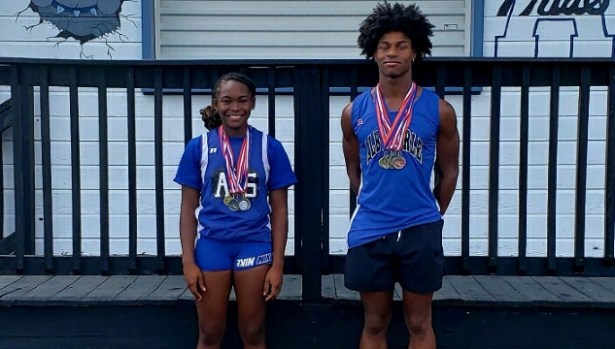 Somajhe Porter and Ali Currie show the medals both won after claiming regional titles at the 2021 1A Midwest Region track meet. (Contributed)

North Carolina A&T will host the 1A state finals starting Friday at 9 a.m.

One of the outstanding performances of the day came from Comets senior Taegan Lowder.

Competing in three events, Lowder won the long jump with a distance of 17-foot-9, winning by 7.5 inches.

She also won the triple jump regional title with a 34-foot-1.25 distance, winning by 7.75 inches.

Lowder finished second in the high jump qualifying for states at a height of 4-foot-11, coming within one inch of winning a third regional crown.

The Bulldogs track teams had the most to qualify for the 1A finals of the four Stanly schools competing.

Somajhe Porter will get the chance to defend her 2019 1A state title in the 300-meter hurdles. She won the 1A Midwest Regional in the event by one-hundredth of a second, finishing in 49.34 seconds.

Ali Currie qualified in three events, including a regional title in the triple jump (40-foot-10.5) by .5 inches. The Albemarle junior also qualified for states finishing second in the high jump (6-foot-6) and third in the long jump (20-foot-5).

The team of C.J. Ellis, Jaylen Pinkney, Anthony Chambers and Christian Poplin finished third in the 4×100 meter relay in 45.62 seconds.

The 4×200-meter team of Jameel Shaeed, Jaquavius Caraway, Ezra Powe and Omaurion Eldridge took third place with a time of 1:35.48, only three seconds behind the first-place team from Mountain Island.

Freshman Emberleigh Pauley-Brown qualified for the state finals with a fourth-place finish in the 1,600-meter run with a time of 5:50.84. Her time was a little more than eight seconds longer than first place.