Onii Bivens won two regional titles and will compete in three different events in this year's 2A track and field finals. (Contributed) 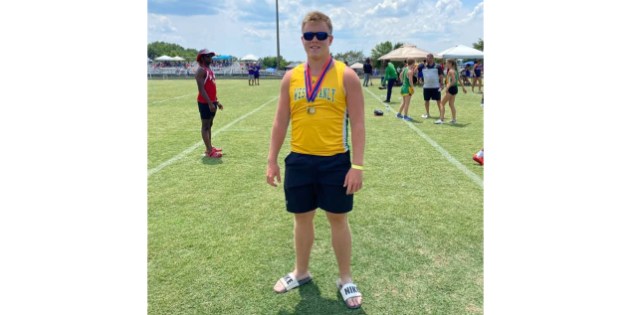 Jacob Buczinski won the 2A Midwest Shotput title and will compete at the state finals in both shotput and discus. (Contributed)

This Saturday morning at North Carolina A&T in Greensboro, the 2A track and field state finals will feature several West Stanly athletes.

Almond, the reigning Rocky River Conference Runner of the Year, earned three regional titles in distance running. She claimed the 800-meter run finishing in 2:30.68 with a margin of victory of just under 1.5 seconds.

West junior Onii Bivens won two regional titles. She claimed the long-jump crown with a distance of 17-foot-3. Bivens was the only competitor at the Midwest meet with a jump of 17 feet or longer, winning by five inches.

Bivens also won the 2A Midwest title in the 400-meter dash. Her time of 59.74 seconds was the only sub-one minute result at the meet in the event. She will also compete in the 100-meter dash after finishing third with a time of 12.56 seconds, .14 seconds out of first place.

The other regional title came off the hands of West senior Jacob Buczinski, who won the 2A Midwest shotput title by just under three feet after a throw of 47-foot-10.5.

Buczinski will also throw the discus at the 2A finals after finishing second at regionals with a distance of 128-foot-7.

James Shue, a junior, will run for West in the 3,200-meter run after placing third with a time of 10:16.23, just over seven seconds behind the winner.