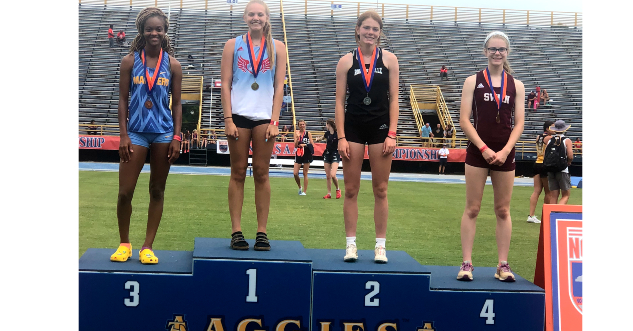 She was the Yadkin Valley Conference’s volleyball Player of the Year, where she and her teammates did not get to vie for a state title because of COVID.

However, her ability and drive led her to further success in track and field with the chance to earn a state title.

On her second attempt of the day, Lowder leapt to a distance of 36-feet, five inches. She won the title by nine inches over Zoie Schuler of Robbinsville.

Lowder faced some adversity at the state finals, however. She was competing also in high jump and long jump. On her last long jump, she aggravated a groin muscle injury.

The Comet senior ended up second in the high jump and fifth in long jump.

Next up was the triple jump.

“We were all worried through triple jump, but I pushed (the pain) out,” Lowder said.

Lowder said she switched from running events to jumping this season which made for big differences in practice.

“He made me way more confident in myself, he and Coach Davis,” Lowder said.

She wanted to go out with a bang, Lowder said, after her volleyball team did not get to go to the state playoffs.

“Volleyball is obviously my favorite but (the season) didn’t end as we had wanted it to end,” Lowder said. “Track was another eye-opener that winning in something else was fun. I’m glad I got to do it because volleyball didn’t work out.”

Lowder’s title is the first state crown for the Comets in track and field since Krystal Noll won the 2A 800-meter run in 2000.

She thanked her coaches, teammates and her parents for their support, including her classmates who made the drive up to Greensboro to support her Friday.

“Everybody was just rooting for me, and it was great,” Lowder said. “I feel like all of my hard work came together.”

Her win in the triple jump was her last high school sporting event, so she said to herself that “it was now or never.”

“It was painful, but worth it.”