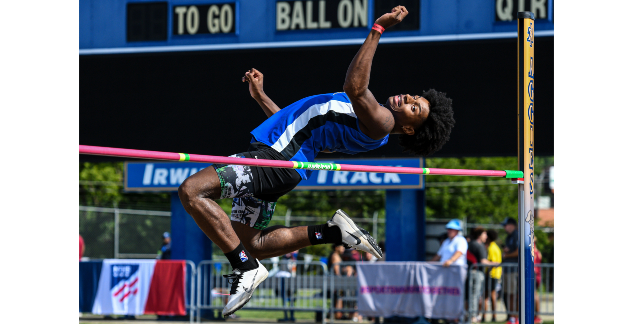 Ali Currie glides over the bar during the high jump at the 1A State Finals Friday. (Photo courtesy of Rick Sammons/MaxPreps)

Ali Currie, a junior, became the first Bulldog male since Terrace Ellis in 2015 to earn a state title.

Currie was one of only five athletes at the meet whose previous best, used for seeding, was 40 feet or more. Seeded fourth, Currie’s principal adversary was Princeton’s Bryant Keokanya, who had previously posted a 45-8.25 seeding distance.

“I went in there and everyone was talking about how good they are jumping,” Currie said. “It made me nervous at first, but I just hung in there.”

In his second attempt, Keokanya took the lead with a 44-1.75 effort, while Currie’s attempts started just under 40 but steadily increased.

Currie said he had set his own personal record just before his medal-winning jump, at 44-0.25, which gave him momentum. On his fifth attempt, Currie took the lead with what proved to be the winning distance, 44-9.5. Keokanya did not get above 44 feet on his final four jumps, fouling on the last one.

A standout on the Bulldogs’ men’s basketball team, Currie said doing track and field has helped him be quicker and stronger overall.

Being an individual competition rather than a team sport, Currie said his time doing track and field prepared his mind to be stronger.

“The biggest benefit from it is just learning how to overcome things,” Currie said. “I felt good knowing I had accomplished something.”

Currie also finished tied for third in the high jump with a height of six feet, even with Aiden Myers of Franklin Academy. He also took third in the long jump at 20- 3.75.

Henry said he told Currie “if you run track for me, you’re going to jump a lot better in basketball.”

Another basketball player, Antonio Burns, recruited Currie to the team at Henry’s behest.

“I recruit kids (for track) with other kids’ great experiences on the track team. It’s a community-based thing. If I can’t help you in track, I’m going to help you in general as a learning experience as a young man. That’s what coaching is.”

Burns and Currie were very competitive with each other, Henry said.

“It’s an older alpha dog saying to the young pup, ‘You’re not coming into my yard,’ ” Henry said.

Currie, Henry said, has the competitiveness of legendary boxing champ Muhammed Ali, for whom he is named.

“He’s figuring out how to beat you. He’s a true gamesman,” the Albemarle coach said.

Henry also said “it’s just a blessing to have someone so humble, that doesn’t talk junk. Get him mad, though, and it’s on.”

“I had never felt anything like it before. I’m happy.”