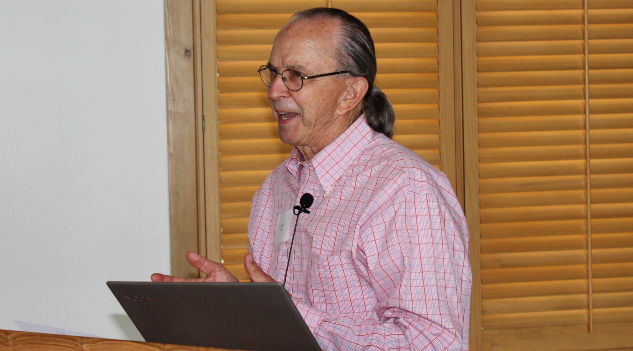 Dr. Charles Coble speaks to members and supporters of the Stanly County Historical Society at Juneberry Ridge near Norwood. (Photo by Charles Curcio/staff)

The discovery of a letter written by the daughter of a former vice president confirmed a connection between Stanly and the White House, according to a recent presentation in Norwood.

Juneberry Ridge hosted a presentation by the Stanly County Historical Society about nearby Rocky River Springs, which for years served as a regional retreat and included a hotel.

It was Farmer’s grandmother whose story she was told as a young girl which provided the basis for the presentation.

Farmer introduced keynote speaker Dr. Charles Coble. An Oakboro native, Coble taught for 23 years as a professor of science education at East Carolina University and was the school’s dean of education.

He later served for six years as vice president of University School Programs for all 17 schools in the UNC system.

In her introduction, Farmer noted Coble is the owner of the former mill site along the Rocky River.

“We have a strong connection to Rocky River Springs,” Coble said.

The speaker talked about a story passed down to Farmer from her grandmother about the daughter of Vice President Aaron Burr.

Theodosia Burr Alston sent a letter from Rocky River Springs to the White House on June 24, 1809. The letter was to First Lady Dolley Madison, wife of James Madison, the fourth president of the U.S.

Alston was advocating on her father’s behalf after his fall from grace following his duel with Alexander Hamilton.

Burr had been acquitted of treason, stemming from an attempt to overthrow Spanish rule in Florida and the Mexican government. He lived in exile in Europe to escape creditors while his daughter sent him money.

Places like Rocky River Springs, Coble said, were popular destinations for special events, vacations and celebrations in that time.

According to Coble, thousands of people at one point spent time there over the years. Included in those visitors were the wealthy and famous, he said, like Alston.

Coble shared facts about Burr’s daughter during the presentation. She married future South Carolina Gov. James Alston, and was lost at sea in December 1812 while aboard the schooner Patriot.

The event served as part of a fundraising drive for the historical society.