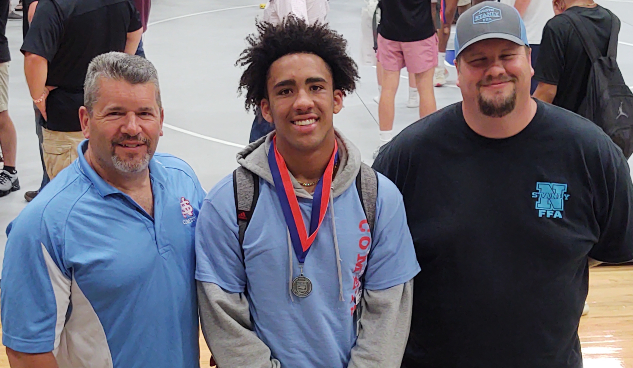 Originally, the state finals were to be at Glenn High School along with the 4A finals. However, because of the small size of the gym, the finals were moved to Uwharrie Charter.

The highest finisher at the state finals from a Stanly school, Meliek Bryant made it all the way to the final match of the 1A 195-pound division.

Bryant opened the competition with a pinfall in 3:36 versus East Surry’s Daniel Villasenor. He then met Jordan Mitchell of South Stokes in the semifinals. Trailing 10-8 through two periods, Bryant posted two near-falls and a takedown in the last period to win by decision, 15-11.

The North junior finished 18-3 on the season, suffering a pinfall loss in the finals in 1:17 to Robbinsville’s Kyle Fink, finishing as the state runner-up at 195 pounds.

The Bulls sent seven wrestlers to the state finals, with three of them earning a spot in the medals.

Tony Rogers finished third in the state at 220 pounds for the Bulls, opening with a 1:15 pinfall versus Andrew’s Samuel Wood. Ben Wachacha of Robbinsville pinned Rogers in the semifinals in 3:38.

In the third-place match, Rogers won versus Mt. Airy’s Saverio Lennon by pinfall in 1:41.

At 152 pounds, Michael Gabbard ended up fourth for South. He opened with a 3:22 pinfall versus Alleghany’s Isaac Stoker but lost in the semifinals 5-3 to Connor Medvar of Mount Airy. In the third-place match, Gabbard lost a close decision to Uwharrie Charter’s Grayson Roberts, 4-2.

Trent Drake took fourth for the Bulls at 160 pounds. Drake won in 41 seconds by pinfall in the quarterfinals versus Union Academy’s Isaac Williams in 41 seconds.

Drake then lost in the semifinals by a 7-3 decision to Avery County’s Bradley Parker. In his last match, he lost by majority decision, 12-1, to Cherryville’s Chase Miller.

At 120 pounds, Ricardo Bustos was one of two Bulldogs to earn a medal, finishing in third place.

Bustos won in the quarters versus Murphy’s Logan Hyde by pinfall in 2:29, then fell in the semifinals by majority decision 11-0 to Grant Reece of Avery County.

The Bulldog junior trailed Brandon Ropp of Rosman in the third-place match 4-0 after the first period. Bustos responded outscoring Ropp 9-0 in the second period and earned third place with a 15-10 decision.

In the heavyweight bracket, Albemarle senior Naqian Carpenter finished in fourth. He started with a pinfall in 1:23 versus Swain County’s Conner Driver, but lost in the semis by pinfall in 2:56 to Elkin’s C.J. Henderson.

Carpenter wrestled Carlos Wesley of Robbinsville to a scoreless first period, then led briefly 1-0 with an escape at the 1:47 mark. Three seconds later, Wesley got a two-point takedown to take the lead, 2-1. In the last period, Carpenter got another escape but one penalty point to Wesley gave the Black Knights wrestler the win.

The Colts had two wrestlers finish in third place.

Whitley then won in the quarterfinals with a 12-3 majority decision over Ashe County’s Drew Rowland after leading 2-0 after the first period and 4-1 after two.

In the semifinals, he lost a majority decision to CATA’s Hunter Ross 16-5. Whitley bounced back in the third-place match with a 9-8 decision over Landon McFarland of Oak Grove. Trailing 5-1 going into the third period, Whitley outscored McFarland 8-3 to earn third place.

At 152 pounds, Aidan Hiott also won third place. He opened the finals with a pinfall in 1:53 versus Hunter Dickens of Ayden-Grifton. In the quarterfinals, Hiott jumped out to a 4-1 lead and never trailed, advancing with a 12-6 decision versus West Lincoln’s Ricky Reynolds.

In the semis versus Tyson Riley of South Point, Hiott trailed after one period, 6-3. He battled back to within one point, 8-7, but Riley added one point in the third period.