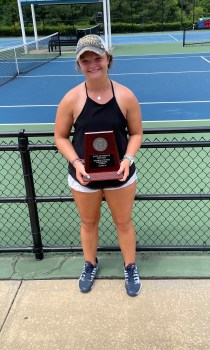 Emma Grace Bost was the 1A runner-up for the third time in four seasons. (Contributed)

There are teams which have dominant seasons year in and year out, and those who only post one now and again.

And then you have the Gray Stone women’s tennis team.

The Knights have been one of the strongest programs for the school and in the area, finishing this season undefeated in the Yadkin Valley Conference.

For Gray Stone, it’s the school’s fourth YVC title and seventh title in the sport since 2013.

Beyond the match victories was the Knight’s dominance in singles play. Gray Stone won 71 out of 72 individual matchups in going undefeated and winning the 2021 YVC title. Gray Stone was also 24-0 in doubles’ play this season.

The only individual loss of the season came against South Stanly when Gray Stone’s top seed, Emma Grace Bost, suffered a hamstring injury. With everyone moving up a spot, Emma Sparger lost in straight sets to South’s Jacy Noble, 7-6 and 6-3.

In singles’ play, Gray Stone only lost a few games overall, most of which came in the South matchup as well.

Since the NCHSAA decided not to have dual team playoffs, the Knights looked to earn honors in individual singles and doubles tournaments. 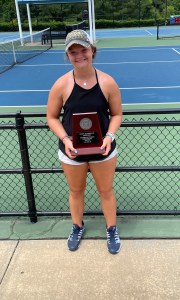 Emma Grace Bost was the 1A runner-up for the third time in four seasons. (Contributed)

At the 1A regionals, Bost finished runner-up, qualifying for her fourth state finals tournament in four years.

Both doubles’ teams from Gray Stone which advanced to regionals lost in the first round.

At the state playoffs, Bost reached the 1A finals after winning in straight sets in the quarterfinals and semifinals, losing only two games out of four sets.

In the finals, Bost lost to Andersen Schubert of Pine Lake Prep in a long matchup. She won the first set, 7-6, winning the tiebreaker 7-3 but lost the second set, 7-5, and the third set 6-0. She finished her senior season as the runner-up for the third time in four seasons.

Of his team’s top four seeds this season, head coach Zeb Bost said the quartet of players “were very committed; they worked hard.” He added the players had a high “tennis IQ” and were smart on the court.

“They are grinders. They don’t mind sitting out their all day long until you make a mistake,” Coach Bost said. “They know when to lob, when to hit cross-court.”