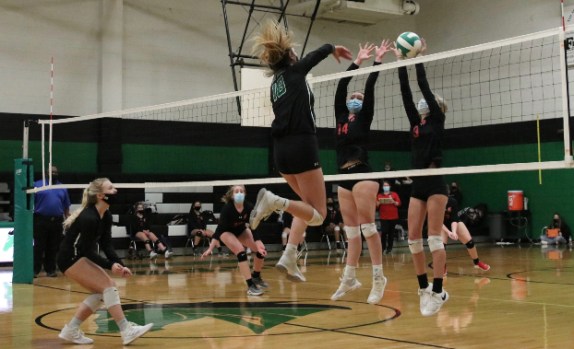 Kayli Cleaver goes for a kill in the Colts' win over Central Davidson. (Photo contributed by Jennifer Barbee) 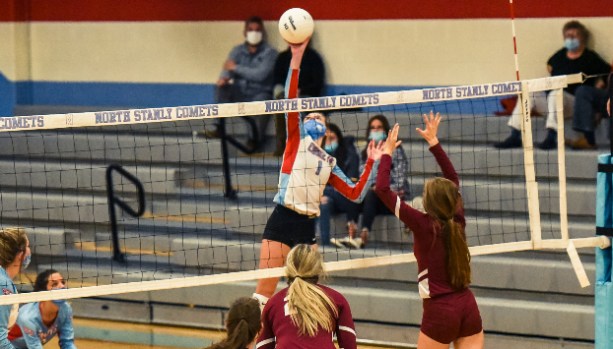 Taegan Lowder was the Player of the Year for the YVC in volleyball this season. (Photo contributed by Dawn Lucas)

With the sports seasons crossing over in this shortened year, the annual All-Stanly News & Press high school teams have been delayed.

Here are this year’s selections for volleyball, starting with the Player of the Year.

Co-Players of the Year

Named the Rocky River Conference’s Player of the Year, Cleaver helped lead West to a 9-0 conference mark and a 10-1 season, along with a berth in the 2A state playoffs.

West head coach Steffi Dutton said Cleaver was definitely the team’s go-to hitter for the majority of the season.

“Her energy on the court was contagious, not only when she got a kill, but also when her teammates succeeded,” Dutton said. “She had a great connection with both Addie and Riley Barbee which made an even more successful hitter. When I moved her from the Middle to an Outside hitter, she stepped up more than I could have asked in hitting and passing.”

The senior outside hitter had a stellar season, finishing with 164 kills in 11 matches for the 10-1 North Stanly Comets.

Lowder led North in kills per set (4.1) and had the second-highest kill percentage on the Comets (43.4). She also was second for North with 34 aces and 105 digs.

She was named the Yadkin Valley Conference Player of the Year and led the Comets to a 10-1 record and the conference title.

“Taegan’s commitment to the game to continually push herself to be her best shows what it takes to reach this level,” North head coach Jamie Kimrey said. “Players like Taegan are special.”

Madison Kee – The senior was second for West with 128 kills while adding 35 aces and 32 blocks.

Riley Barbee – Another All-Conference selection, this senior finished the season with 110 kills, 43 aces, 182 assists and 102 digs.

The Comets finished 10-1 overall, undefeated in YVC play with an 8-0 mark. Because of a positive COVID test, North could not play in this year’s state playoffs.

Alex Childress – This senior drove the offense for North with 317 assists in 29 sets played, averaging nearly 11 per set. Childress also led the Comets with 41 aces.

Cleo Carter – A senior outside hitter, she was first for the Comets in kill percentage (45.4) and second on North with 147 kills. Carter was second for North with 12 blocks and third with 26 aces.

Margaret Huckabee – An outside hitter for the Knights, Huckabee led Gray Stone with 69 digs.

Lannah Huneycutt – The junior setter for Gray Stone led the Knights with 148 assists.

Morgan Kinley – One of the league’s best two-way players, Kinley had a high hitting percentage for the Bulls and put her attacks in play; however, the senior also was strong defensively this season.

Kassie Swink – Swink was not scheduled to be the primary setter. However, injuries to the team forced the sophomore to step into the role. Her efforts earned her All-YVC honors.

Somahje Porter – The senior played middle hitter for the Bulldogs and was named All-Yadkin Valley Conference.