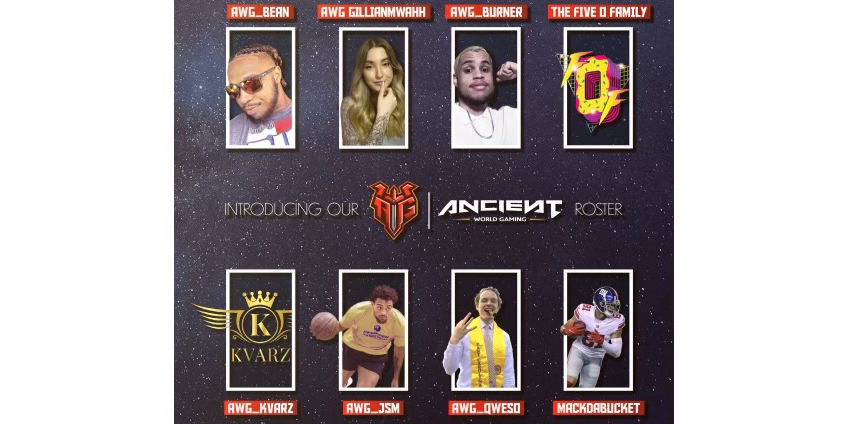 The members of the Ancient World Gaming team. (Contributed)

From his days setting records as a Comet through the college ranks and now as a member of the Buffalo Bills, Williams has been driven to succeed.

Williams’ latest venture is into the world of competitive video gaming.

E-sports has grown into a multi-million dollar industry where players compete against each other on games. Video game fans watch the competitions online on platforms like Twitch, YouTube and others.

Williams said his players are athletes in order “to be able to think and come up with strategy in the way these guys and girls love to do.”

AWG already has a presence on Twitch with 933 followers as the team’s players create gaming content by live-streaming when they play.

“We want to be out on the internet and have our brand out there as much as possible,” Williams said.

The former Comet said teams like his all want to be as famous as FaZe Clan, who was recently on the cover of Sports Illustrated for its success in e-sports.

Teams go up against each other in games like Call of Duty, League of Legends and more with money prizes on the line.

Williams wanted to get involved in e-sports as a gamer himself. His connections with his NASCAR team helped him to start the team.

He intentionally has kept the roster small, he said, but will continue to expand.

Albemarle’s Wes Dennis, or AWG_Queso online, was the first official member of the team.

Having grown up together playing video games, Dennis said when the opportunity came to join AWG, his childhood friend knew what he could bring to the squad.

“I sent him some (video) clips and it kind of just went from there. I was really excited to get going on the team,” Dennis said.

Dennis said one strength of the team is experience as he and his teammates have all played games since they were young.

“It’s like any other sport. Like basketball, you don’t see players playing for two years and be the best on the court. It takes time to get really good at your craft,” Dennis said.

Playing at the top levels required good muscle memory along with finding the right sensitivity level for the game controls, which works best for a player.

Like others on the team, Dennis was a high school athlete, playing basketball, football and running track for North Stanly.

Another local member of AWG is Pfeiffer men’s basketball standout Taylan Rowe, a member of this past season’s USA-South East Division champions.

Rowe, a former West Stanly standout athlete who competed with Williams over the years when he was at North, credited his friend for how he uses his platform as a pro athlete “to venture out and create other opportunities for himself and others.”

When not studying or practicing, Rowe said he is playing Call of Duty.

“This is something I love to do…I take it very seriously,” Rowe said.

One does not have to be an athlete to be a top competitive player. Being a basketball player might help when playing a basketball game like 2K21, but that advantage might not transfer to other games.

However, a strong work ethic as an athlete can make a difference.

“I put a lot of time into Call of Duty…I’ll play 2K sometimes with Antonio just for fun. But playing Call of Duty, I go into a different mode. That’s work,” Rowe said. “I kept getting better. I played it so much.”

Playing does not interfere with his other responsibilities, he added.

“When I’m not working out, I was cutting on my PS4 or PS3 and playing Call of Duty,” Rowe said.

Other team members are from Pittsburgh, Indiana and Ontario, Canada.

Having been coached for many years, Williams has taken some of those ideals into leading AWG.

Helping players understand their different roles, based on the number of followers, has been important early, he said.

“You’ve got to understand your roles…(you have to) allow people to understand if you put in this work, you get the results. It’s that simple.”

Having his players understand the concept of time to get things done is also important.

Using a recruitment video, Williams had 500 emails for players wanting to join AWG by the end of the first week.

Watching prospective players, Williams said he looks for three things in them, including if they fit in with what he was trying to do as a team. He also wanted to see if they had the ability to compete in tournaments, along with how well players interacted with their respective audience.

Among the players is another NFL player, New York Giants wide receiver Austin Mack, whose gamer tag (nickname while gaming) is MackDaBucket.

“Having that NFL logo beside our names…is big for the team,” Williams said.

A recent edition to the team is the FiveOFamily, a family of gamers who “promote positivity through their streams,” according to the AWG website.

Williams is also helping develop business relationships and sponsorships for the team. Believer over Opinion Apparel is AWG’s official apparel sponsor, while Athlane is a San Francisco-based marketplace for video game teams.

The team owner also recently signed a sponsorship with Bucked Up Energy Drinks. AWG fans can get a 20 percent discount off Bucked Up products with the code AWG20.

On Twitter recently, Williams announced a partnership between his team and GamerAdvantage, who makes blue light glasses which help filter the light from computer and device screens.

Williams said the future for e-Sports is one in which many people have not tapped into yet.

“I figure that I’ve done a lot of firsts. Why not be the first to get this going?”

Covid cases in Stanly have risen more than 780…