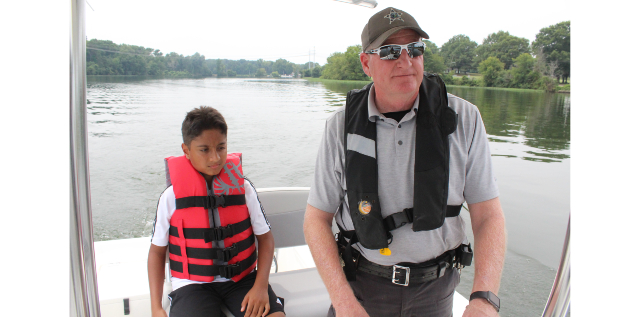 Krish Patel and Darnell Almond take a ride on Badin Lake at Friday's launch of the new boat for the Stanly County Sheriff's Office. (Photo by Charles Curcio/staff)

With the summer boating season well underway, the Stanly County Sheriff’s Office has a new addition to its fleet.

A new lake patrol boat was launched Friday afternoon in an event at the Badin Lake Boat Launch.

The boat was launched as part of an event which included a safety demonstration and a youth life jacket giveaway by Cube Hydro.

Cube Hydro will provide signs for Stanly’s middle and high schools on the dangers of underage drinking as part of its community outreach program.

Darnell Almond, who is part of the Sheriff’s Office lake patrol, thanked the contribution of Eagle Creek and Cube Hydro to the new boat. The companies gave $30,000 towards the new $70,000 boat, while the remaining fund came from drug forfeitures.

Kids at the event got a ride on the new boat along with Cube Hydro and Eagle Creek representatives.

Cube Hydro provided a free life jacket for the kids and have more available for youth in the community, Baldwin said.

Almond talked about the prevention of problems on the lake.

“Alcohol and the lake do not mix,” Almond said.

The new boat, Almond said, is exactly like the boats used by the NCWRC. Deputies were trained on the new boat by NCWRC personnel.

Almond added personnel from the Sheriff’s Office and NCWRC can operate one another’s equipment since it is the same.

The boat also has a depth finder and new technology allowing the operator to see the depth of the lake on either side of the boat and what is underneath them.

Included in that coverage along with law enforcement is safety, he added.

During the event Friday, one resident shared his story of nearly dying and how a life jacket and rescue personnel saved his life.

Russell Kraus, a local who nearly drowned in March while canoeing near Falls Dam, was saved that day by Almond and NCWRC officer David Ritzheimer.

“I was blue and had water coming out of every orifice of me,” Kraus said.

Almond and Ritzheimer were able to revive Kraus and get him to EMS personnel quickly.

Kraus said he was revived on the boat but later his heart stopped on two occasions.

He still canoes, including a trip in June, and is a believer in life jackets, he said.

“Always have your life jacket with you,” Kraus said. “It’s better to have it and not need it than need it and not have it.”