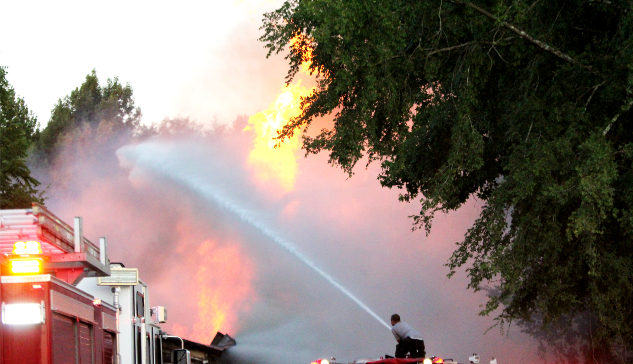 A fire broke out in Albemarle Thursday night, sending billows of smoke in the air visible for miles.

The call to 911 came in approximately 7 p.m. stating smoke was coming from AL Lowder off U.S. Highway 52.

A business located behind the Lowder property, A & H Millwork off Old Charlotte Road, was the property which caught fire.

Owned by Ed Harris, the 50-year-old business produced handcrafted doors and furniture. Three people were employed by the business but were reportedly not in the building as their shift ended at 3:30 p.m.

According to Albemarle Fire Marshal Michael Roark, Engine 121 was the first to respond and upgrade it to a full structure fire, seeing the smoke in the air.

Off-duty firefighters were called in along with units from Bethany, Endy and Southside fire departments. Stanly County EMS was also on scene along with the rescue squad who filled air canisters for the firefighters.

Roark said the biggest problem with fighting the fire was getting access to the building, which was approximately 200 feet long.

“Because of fire and smoke conditions, we couldn’t get the apparatus any closer,” Roark said.

The ladder from Southside was extended over a building next to the fire to get another stream of water going.

Roark said he did not know if anyone was in the building at the time of the fire. He said the investigation process was underway but no cause for the fire has been determined.