After about a decade with health department, Layton transitions to role in Randolph 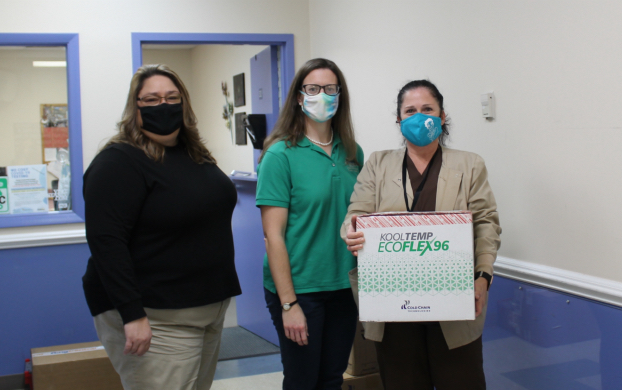 After helping oversee Stanly’s efforts in responding to the opioid epidemic and the coronavirus pandemic, along with a slew of other key roles and responsibilities, Jennifer Layton recently stepped down from her position with the health department.

The Stanly native is leaving the department, where she’s spent almost a decade, to serve as the new assistant public health director for Randolph County. Her first day in the new role was Aug. 2.

Though she wasn’t actively planning on leaving the department, she was approached by Health Director David Jenkins about the opening and encouraged to apply.

While it was a privilege to “have the opportunity to serve a community that essentially raised me,” Layton, 36, is ready and eager for a new challenge.

“I am a people person,” she said. “I love talking to people and I love meeting people and so one of the things I’m most excited about is I have the opportunity to build new relationships.”

“I’m really excited to expand my network,” she added.

Getting to know the community

Layton began her career with the health department in 2012, shortly after completing graduate school at UNC Charlotte with her master’s degree in public health. One of her professors had worked with Stanly’s health director at the time, Dennis Joyner, and helped put Layton onto his radar. Adamant about wanting to work in her home county, she said she “harassed Joyner for months.” Her persistence paid off as she was eventually granted an interview and was soon hired as a public health educator.

“One of my co-workers said, ‘Yeah, out of everybody that we interviewed, you were like a live-wire. You just had all this energy and we never had that and we really wanted it,’ ” Layton recalls.

As someone who was born and raised in Stanly, coming back years later after college represented a “full-circle” moment for Layton.

Previous health educators had used the position as a stepping-stone to help launch their careers and typically lasted about two years. As a result, the department had struggled to forge strong connections with the surrounding community — something Layton set about to change.

During her first few years, she spent much of her time volunteering and getting to know various community-based organizations and the issues important to them.

“It was a lot of grassroots work, which is the best way to learn,” she said. “You get out there and you ask people: What do you think the issues are? What are your concerns? What are the gaps?”

As she learned more about the communities in Stanly and what was needed, she began to take action. In 2013, Layton started the Stanly County Farmers Market, which still is in existence today; she later worked with the community care clinic to create fruit and vegetable vouchers for its patients.

“That was important to create access to good quality, healthy food for low-income families,” she said about the market.

Also critical was fostering relationships with communities of color, which are more predisposed to severe health disparities than their white counterparts. Layton canvassed the county trying to identify the right people, or gatekeepers as she called them, to help her get established with different groups.

After attending numerous community meetings and events, one name kept coming up: Garry Lewis, the former director of public housing in Albemarle. She got in contact with Lewis and discussed with him her goal of creating a minority health council to help amplify the needs of the various minority populations in Stanly. He was quickly on board and the group was created in 2014.

“Our African American community and our Latinx community do not have the level of support that they need to address the disparities and improve health,” she remembers telling Lewis.

Since its inception, the Stanly County Minority Health Council has been a key advisory group to the health department, and it continues to help the department identify barriers to care for residents.

Lewis, who is chairman of the council, said Layton was the “main stimulus” for developing, organizing and keeping the group going since its founding.

“Her tireless, knowledgeable, tactful, professional, down-to-earth smiling personality will be missed, no doubt,” he said.

The council has also meant a lot to Layton. It’s provided her “the best perspective” on what it means to “have privilege and access to good quality care.”

She’s also appreciative of the relationships she’s fostered with the many members.

“They’ve taught me far more than I’ve taught them,” she said.

Dealing with the opioid epidemic

During her tenure with the department, Layton had to adapt and learn on the fly about issues she had little prior knowledge about. Around 2015, for example, as Stanly began receiving statewide attention for its struggles combating the opioid epidemic, Joyner tapped Layton to help lead the department’s response.

Joyner’s response, she recalls, was short and to the point: “You might want to get comfortable and learn a little bit about it.”

And that’s what she did.

She traveled across the state, speaking to all kinds of people about addiction and substance use. Layton talked to law enforcement, families impacted by overdoses, individuals in recovery and in harm reduction groups. She also helped bring Fred Brason, who created the organization Project Lazarus as a response to overdose deaths in Wilkes County, to Stanly to talk about small steps communities could take to address the opioid crisis.

Layton began networking with local organizations to establish Stanly’s own Project Lazarus in 2015. The coalition, which is comprised of public health, health care, law enforcement, mental health personnel and concerned citizens, focuses on the prevention of substance use and supporting harm reduction, treatment and recovery efforts in Stanly. One of the group’s first campaigns was establishing medication drop boxes at both the Albemarle and Oakboro police departments for people to safely dispose of prescription drugs.

The group has also worked with officials from the Charlotte-based Center for Prevention Services, which in 2019 awarded a five-year, $1.26 million Partnership for Success Grant (PSG) to help curb the substance abuse in Stanly. In addition to its major initiatives, CPS has helped bolster and expand membership in Project Lazarus.

In addition to her efforts with Projects Lazarus, Layton also helped secure grants to help build the department’s response to combatting the epidemic.

“I’m so proud of the community partners that have stepped up to build the programs that were needed to meet the needs and to help fill the gaps and to keep people safe,” Layton said.

While the community hasn’t yet witnessed the full impacts of these programs and opioids remain a problem, she’s optimistic about the near future.

“In five years, our numbers are going to look radically different as long as those programs are still operating and are still healthy.”

Working during the pandemic

When Layton was in graduate school, she took classes such as epidemiology and biostatistics, where she learned about pandemics, including how they spread and how best to try and contain them. Little did she know at the time how useful that information would be.

She remembers the concerns local health departments had when a few cases of Ebola were first reported in the country in 2014, but the threat was quickly contained and never materialized into a true crisis. The prospect of an actual pandemic occurring in the United States became a distinct possibility for Layton when she read several peer-reviewed journals around 2018 and 2019 suggesting the country was on the cusp of experiencing one.

“I was like, ‘Hmm, I need to do some reading on that,” and so she began reading books about previous pandemics like the flu of 1918 and how animals can transmit infectious diseases to humans.

Layton had just returned to Stanly from a trip to Washington, D.C. last spring when what she learned about in school became a reality. The health department quickly pivoted from its normal functions and its work almost exclusively focused around dealing with COVID-19.

The health department set up a public health command center and Layton became the preparedness coordinator, which involved documenting everything that happened within the department. Even before guidelines were sent out from the state, Layton said, the department had already implemented COVID case investigations and contact tracing protocols.

“It’s impressive to see how quickly our staff scaled up and prepared to respond,” she said, noting many worked around the clock with few breaks. “We put in a lot of time to try and get ahead of it.”

But even with vaccinations readily available to most people, COVID cases have rapidly increased in Stanly over the past month and are showing no signs of slowing down — especially with almost 70 percent of residents not yet fully vaccinated.

And this has Layton worried.

“At this point, after what we have seen in the last year and a half, I am more frightened now than I was a year ago,” she said, noting that she’s seen models estimating the pandemic could last another year. She’s most worried about the virus mutating and producing even more infectious and deadly variants.

With Stanly still a long way from achieving herd immunity, the best way people can protect themselves, she said, is by getting vaccinated and wearing masks in public spaces.

While the past year and a half has been difficult and has presented the department with numerous obstacles, Layton is proud of her former co-workers and the work they have accomplished.

“I’m so proud of them, but I’m also proud of the fact that we’re part of history,” she said. “We have made history in the service that we provided to our community.”

Layton will now begin to make history elsewhere, with another county’s health department. One of her biggest projects in Randolph, aside from dealing with the pandemic, will be working to address the county’s struggles with opioid overdoses, an issue she is familiar with.

Even with the new job, she will continue to maintain an active presence in Stanly. She still lives in the area, her 9-year-old son Rhys is enrolled in the school system and she plans to support the many programs she helped create.