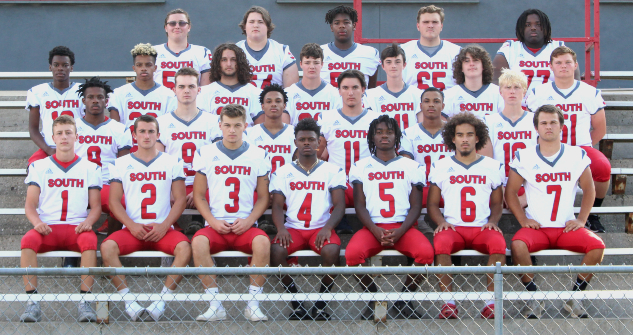 The shortened 2021 spring season, along with COVID-19 pandemic restrictions, limited many high school football programs in the state in terms of games played.

Among those schools who got less than the maximum seven games last season was South Stanly. The Bulls went 2-2 in four Yadkin Valley Conference games and had games with Albemarle and North Stanly cancelled because of COVID restrictions.

Entering his fourth season as head coach for South, Ochier has a 15-14 overall coaching record. South Stanly has not won a county championship since 1989.

1) Only getting four games played out of seven last season has to be a small sample size in terms of your team’s efforts, but what will be the positives and what will need to change for the team moving forward this year?

For the varsity only getting four games and the JV not being able to play a game it was unfair.

It was really hard to see the kids go through practice, work hard and put their blood, sweat and tears into practice and not be able to get anything out of it.

On a positive note, I believe the kids are hungry and ready to fight to the last inch. Practices have been very enthusiastic and they are willing to go the extra mile to get the job done.

2) You started the season with a young quarterback in Drew Gaddy. How has he developed from last season moving forward? Who are the most important returning starters on offense and who are the newcomers who must produce immediately for the Bulls to be successful?

Drew has done a great job in the weight room and leading this team. He is taking it upon himself to make the team better. He had to mature quickly in the spring, but I think he is right where he needs to be for the future.

Right now, our most important offensive players have got to be our offensive lineman. There aren’t many of them, but they have got to step up and do the job that we expect them to do.

Omaurion Eldridge will return in the backfield. With an injury from basketball, he only saw one game last season; the game we saw a lot of exciting explosive plays from him.

Two players that saw sparse time in the spring were Ezra and Jaden Powe. They have to be substantial leaders on both sides of the ball this year.

3) South Stanly will also be very young on the defensive side of the ball. Who is returning, who must elevate their game and who are the top newcomers?

We are really relying on Trevor Tucker and Jaxon Barbee to anchor our defense this year. Both of them are all conference players from last spring. Jaxon was the leading tackler per game in the spring season and was third in the conference in tackles even though we only played four games.

We will potentially start three freshmen and a sophomore on defense. Ethan Gaddy, Drew‘s younger brother, will be starting an outside linebacker.

Damien Crump will start at corner and freshmen Jaqualin Liles and Eli Ross will see substantial time in the backfield.

4) With the new additions and teams removed from the new conference, how has the dynamics of the conference changed and how will South Stanly fit in?

I think from top to bottom our conference this year will be much more even.

We will always have a tough Mount Pleasant team. Jay M. Robinson will be very good once again. North Stanly and Albemarle will always be tough, and Union Academy is much improved.

5) With this being your fourth season with South Stanly, where is the program at in terms of its development? What are the strengths of the program and what are the aspects which need improvement?

We are definitely moving in the right direction. Our GPA as a team is improved, the number of players is up substantially and the boys are doing what it takes to make themselves and their teammates better.

Right now we are sitting at about 67 players on the roster. Our team speed has to be one of the fastest that I’ve had. Omaurion, Ezra and Jaden were three runners on our fifth place finishing 4 x 100 relay team.

We definitely have to improve our techniques. As a team, we have a lot of inexperienced players that need to learn the game a little better and understand their job and role in the overall scheme.