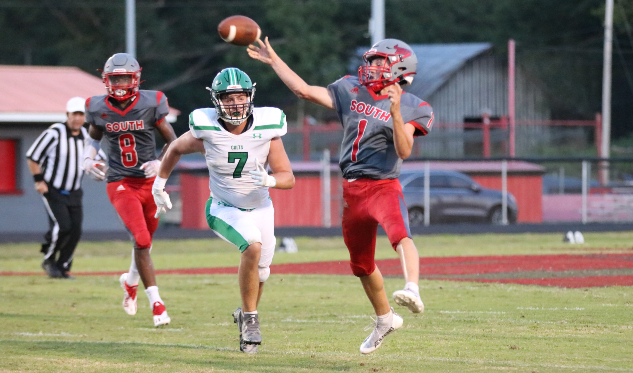 South Stanly QB Drew Gaddy gets the pass off under the pressure of West Stanly's Carter Miller in Friday's game. (Photo Contributed by Shannon Byrd)

West Stanly dominated most of the game on both sides of the ball and won the program’s eighth straight game over South Stanly, 45-6.

“We had to realize what we have,” Hartsell said. “Gavin was a powerhouse. I have more speed so we tried to work around our blocking into different movements and pulls.”

Hartsell credited the front five on offense for West along with other running backs blocking and creating space out of the Colts’ double-wing offense.

“Getting the second line (of defense) controlled and getting past them is probably one of the best things when we have our running backs blocking,” Hartsell said.

South fumbled the ensuing kickoff and West scored on the next play when new quarterback Carson Morton connected with Khaleal McAuley for a 20-yard touchdown pass.

West (1-0) amassed 421 total yards of offense, including 340 rushing yards on 33 carries, averaging just over 10 yards per attempt. Parker added 133 yards on 11 carries with a touchdown as well while Morton added a one-yard sneak late in the fourth quarter.

Morton finished 5-of-8 for 81 yards with one touchdown and one interception.

Defensively, West Stanly shut down the Bulls (0-1) until the final play of the game. South running back Omaurion Eldridge broke away down the home sideline for an 85-yard touchdown, spoiling the shutout bid for West.

That run put South into the positive side with 35 total yards as six sacks and several runs for a loss had the Bulls in negative numbers before the game’s last play.

On defense, Jacob Lisk posted 3.5 sacks in the game to lead West. On one of Lisk’s sacks, South starting quarterback Drew Gaddy suffered a leg injury. He returned briefly at the end of the first half and sat out the second half, finishing with 79 passing yards going 9-of-15 with one interception.

Lisk said the defense came into the game wanting to put the pressure on South’s quarterbacks, which they did.

“We played as a team; we picked each other up if we made a mistake,” Lisk said. “We have had a good reputation (of having) a good defense the past couple of years.”

Trevor Tucker played the second half for the Bulls at quarterback, throwing for 55 yards on 6-of-12 passing with an interception.

Head coach Brett Morton said his offense started well but was “pedestrian” in the middle two quarters. He added his team had “way too many mistakes (and) way too many penalties.” For the game, West had 10 penalties for 76 yards.

Some of those mistakes, Morton added, usually come in a season opening game, but he added West has “a lot of stuff to clean up” on offense.

The West coach said his defense “came out of the chute firing,” adding the team “will be leaning heavily on them.”

As a team, he said, “everyone has their weight to pull and we all have to do the right job.”

West Stanly travels to Albemarle (0-1) Friday night for the second in-county game in as many weeks. The Bulldogs lost 50-0 on the road Friday at Thomasville.

South Stanly starts the first of a three-game road trip Friday by traveling to Southwestern Randolph.