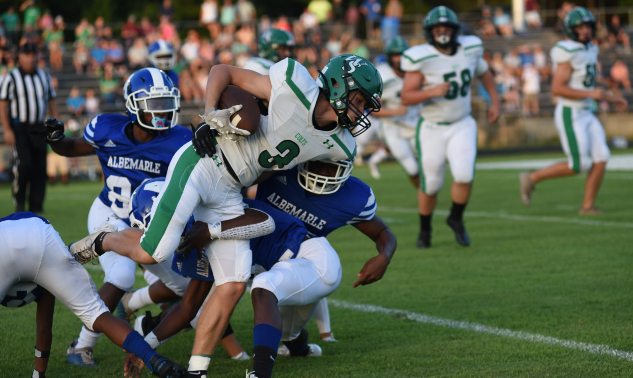 West Stanly running back Matthew Parker tries to get past Albemarle defenders in Friday's game. (Photo contributed by Starla Whitley)

Defense was again the word of the day for the West Stanly football squad.

After shutting down South Stanly last week save for one big play, the Colts gave up two big plays at Albemarle but dominated the rest of the game, winning 34-14.

Included in the defensive efforts for West (2-0) were two first-half safeties. One came on a sack by Jacob Lisk and the other when RB Jaylen Pinckney was tackled in the end zone.

The Colts stopped the Bulldogs 14 times for no gain or a loss. The Bulldogs had 81 total net yards, including -36 net rushing yards including sacks and fumbles.

“I just want to do the best for my team and make sure we go as far as we can this season,” Lisk said.

The senior added West is a family and he “is going to do everything for them I can.”

The aggressive pass rush limited Albemarle to 4-of-14 passing with one interception by Jesse Boone, which set up a one-yard plunge by starting QB Carson Morton.

West finished with 306 net yards on the ground, averaging 5.7 yards per carry with four rushing touchdowns from four players. The physical ground game from West’s offense continued to sustain long drives as the Colts had the ball for just under 34 of a possible 48 minutes. Braden Hartsell again led West with 133 net yards on 18 carries and a TD while Shane Mecimore added 119 yards and a touchdown.

Morton credited his father, Kyle (an Albemarle alumnus), with instilling in him a sense of playing the game aggressively.

“It was preached by my dad. He has always been hard-nosed,” Morton said. “He told me if I get in the open field and someone’s in the way, make them not want to get in the way anymore.”

Bright spots for Albemarle were two pass completions which went for long touchdowns. The Bulldogs (0-2) scored the team’s first points of the season early in the second half on a 70-yard screen pass from Ander Artis to Pinkney for a touchdown. The hosts later added a 40-yard touchdown from Artis to C.J. Ellis in the  fourth quarter.

A scary moment came in the second quarter when the Bulldogs’ Jason Wall was injured trying to field a kickoff out of the air. Before the ball got there, Wall was knocked down to the ground hard. He got up then fell back down to the turf and was down for approximately 20 minutes before being taken off the field. Wall later returned to the sideline but did not play.

The Colts are also 2-0 in county play and could secure the Stanly Cup for the second straight year with a win Sept. 10 at home versus North Stanly.

Albemarle hosts Charles D. Owen (0-1) this Friday night. The Warhorses opened the season Friday with a 56-6 loss to Chase.