Plans for Stanly livestock arena may be changing 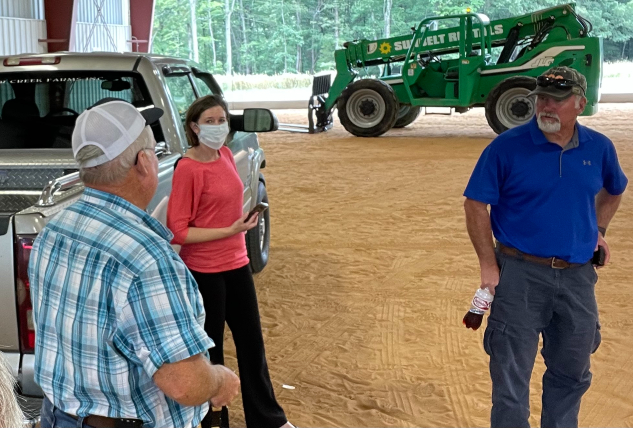 Plans for a new livestock arena at the Stanly County Agri-Civic Center may change if members of one group have their say.

Curtis Furr, a member of the Arena Steering Committee, has been conducting tours with county commissioners and the county representatives of a similar facility in Union County.

Furr is a member of the committee, a group of concerned citizens, along with Reggie Medlin, Frank Simpson, Jim Cameron, Jeff Williams, Doshia Swaringen and N.C. Rep. Wayne Sasser.

The purpose of the group is to facilitate the construction of a livestock arena, Furr said.

In his recent tour with Medlin, Furr said they both left the Union facility “with the idea that we need to change directions of what we’ve been towards as far as the plans for our arena.”

Furr said he believes Stanly could build a similar building “for about the same amount of money” and the space “could be used by anyone.”

The original plans for the livestock arena were for an outdoor venue with concession stands and restrooms.

“We should have maybe taken a look at some of this from the beginning,” Furr said.

Such a building, he added, could go from a cattle sale in the morning and be cleaned out fast enough to host a wedding the same night.

The reason for delays concerning the arena, Furr said, had to do with architect Allan McGuire.

“If he hadn’t dragged his feet, we’d have it built for half the money that we’re going to have in it,” Furr said.

Furr added the process from the architect took more than a year to complete.

Medlin said Stanly’s current plans do not compare with the Union facility “in terms of what Union County got for their money.”

He said everyone with whom he has toured Union’s facility said Stanly needs to “rethink what we’re doing here.”

Furr said everyone he took over “agreed we need to change our plans and go with this (new) facility because it’s more people-friendly for Stanly County.”

County Manager Andy Lucas stated in an email to the Stanly News & Press the status of the arena. He noted the Board of Commissioners recently authorized county staff to issue a request for qualifications (RFQ) to locate a design-build contractor for the arena.

The RFQ was issued in early July, with contractors having submitted qualifications for staff to consider by late July.

Lucas said he felt confident a recommendation to the Board of Commissioners will be made at the Sept. 7 meeting. He said this did not mean a new arena was a guarantee.

“This simply sets in motion the process by which a general contractor will do due diligence to determine whether or not they can design and construct a facility that will meet our budget,” Lucas said. “If they can, a guaranteed maximum price contract will be put into place and construction will commence.”

Lucas said multiple county commissioners have visited buildings and facilities constructed by the general contractors under consideration for the Stanly job. One reason for the visits, he added, was “to get a better feel for what can be done” along with seeing the craftsmanship and functionality.

“Once a general contractor (GC) is selected for the design-build project, the GC will begin a period of due diligence to assess and program what can be constructed for the money the County has available,” Lucas said.

Approximately $3 million has been pledged for the project, including $1.75 million from the county and slightly over $1 million in private donations, corporate gifts, state funding and foundation grants. The county has spent more than $80,000 on “schematics, construction drawings, advertising (required bid notices) and fundraising efforts.”

Regarding changes to the arena plans, Lucas said “it would be premature for me to comment on what changes to the previous drawings and plans will be needed to get the facility constructed within budget.”

Medlin said about the project, “there’s a lot of people in the county who have written checks…we want to see this come to fruition.”