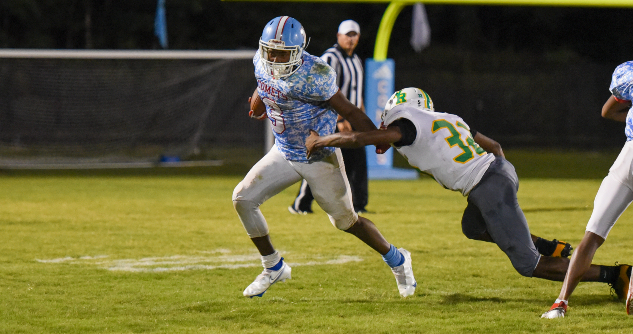 Two football teams in recent years who games have had conference title implications nearly every season are North Stanly and North Rowan.

Friday night at North Stanly the two squared off as former conference rivals in the first non-conference matchup between the two schools.

North Rowan outlasted North Stanly 36-32 in a game which included a record-setting performance for one Cavalier receiver.

Both offenses combined for 796 yards in the game, with each team scoring at least six points each quarter. North Rowan had 419 yards on only 38 offensive plays, averaging 11 yards per play.

Individually, Amari McArthur, a junior wide receiver for North Rowan, may have set a Rowan County record with 271 receiving yards on five catches with three touchdowns. He averaged 54.2 yards per reception, his longest coming to put the Cavaliers in front in the second quarter.

Cavs freshman quarterback Jeremiah Alford was 9-of-15 through the air for 291 yards, throwing three touchdowns and one interception.

Quarterback Luke Shaver was efficient through the air, completing 17-of-23 passes for 153 yards and three touchdowns with no picks. Clay Hatley caught nine passes for 68 yards and a touchdown while Shaver threw a TD pass each in the second half to Dykes and Stefan Harris.

The two teams also were whistled for several penalties. North Stanly had 11 penalties for 91 yards while North Rowan was whistled 10 times for 82 yards. Included in the Cavs’ penalties were two personal fouls for contact to the head by Khalil Davis, who was disqualified from the game.

Points came early and often in the game. North Stanly (1-2) took the early lead on an 11-play, 70-yard, seven-minute opening scoring drive, capped by a five-yard TD run from Shaver.

Alford scored four plays later for the Cavaliers set up by a 76-yard pass to McArthur.

The Comets narrowed the gap to two points midway through the second quarter when Josh Lucas placed a punt inside the North Rowan 1-yard line, downed by Junior Hill. After a false start, Cavalier running back Jae’mias Morrow was tackled in the end zone for a safety.

Trailing 36-32 with four minutes to play, the Comets stopped North Rowan on three plays and called their final timeout. Instead of punting, the Cavs went for it as Alford found Morrow for a six-yard pass and a first down. North Rowan then ran out the clock to preserve the win.

“I told the team we had every chance to drop our head,” North Stanly head coach Scott Crisco said. “We always fought back.”

Crisco said the Comets were down in numbers Friday night, with a lot of players not available to play.

“We challenged (our players) this week. Everybody’s going to have to go both ways,” Crisco said.

He added the team is “getting the pieces of the puzzle together,” saying he hopes to have everyone healthy before conference play, which opens Oct. 1 at Union Academy.

North Stanly will not play West Stanly this week because of the Colts being in COVID quarantine. The Comets will probably not play again until Sept. 17 when the Comets are scheduled to host Randleman.