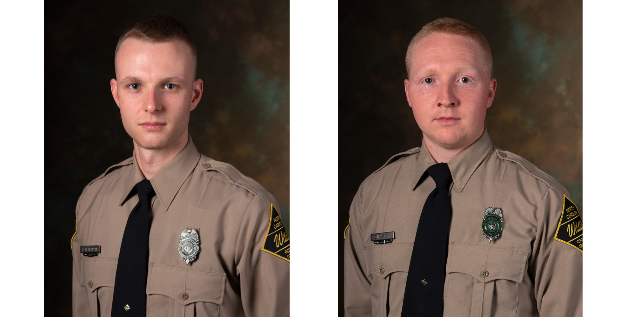 This summer, the North Carolina Wildlife Resources Commission swore in 18 new cadets, two of whom hail from Stanly County.

Officers Kristofer Blankenship and Damon Smith were sworn in as members of the 57th Basic School graduating class. Cadets take an oath to enforce criminal laws, including conservation and boating laws, and to faithfully and impartially execute the duties of a North Carolina law enforcement officer.

With Blankenship, being outside is something he said he has always enjoyed, whether hunting, fishing or kayaking at Falls Reservoir.

During his high school years, Blankenship enjoyed public service as a volunteer firefighter in Millingport.

Combining the outdoors and public service was becoming a wildlife officer, which he called “the perfect career.”

Blankenship got a four-year degree from North Carolina State University in fisheries, wildlife and conservation biology. He also worked as a dispatcher for the NCWRC’s enforcement division before the Basic School started while he was still in college.

“It’s a diverse job. No two days are going to be the same,” Blankenship said.

Because the state is losing more wildland than ever, he added, “it’s more important more than ever to protect what we have so we can continue to enjoy it and other generations can.”

For his first six months, he will work in Guilford County.

Smith also expressed his love for the outdoors. A graduate of West Stanly High School, Smith played baseball for the Colts and later for Pfeiffer, graduating with a degree in criminal justice.

He worked for the Concord Police Department for 2.5 years. He said he had a good experience from being on the force.

However, his end goal, he said, was to become a wildlife officer, calling it his dream job.

Smith said he likes the solitary nature of the job, saying “you have to really enjoy the outdoors and the beauty of God’s creation.”

Conservation is a big part of the job, he added, along with enforcing the state’s regulations.

Being in good physical condition as a former college athlete is important for him to be an effective wildlife officer, he said.

“You never know what you’re going to be involved with on a day-to-day basis. You could be patrolling in your vehicle all day one day and walking five to 10 miles the next,” Smith said.

Smith also said being a wildlife officer differs from a park ranger who also protects wildlife.

“We are protecting (wildlife) but we want people to go out and enjoy being outdoors.”