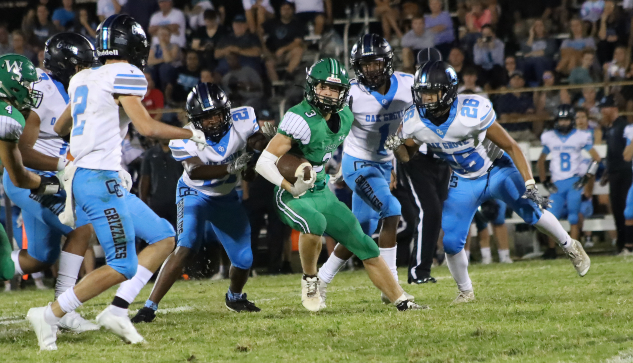 The West Stanly varsity football team got back to the team’s non-conference schedule Friday facing a top rated 3A school in the Oak Grove Grizzlies.

West had only three practices during the week before taking the field Friday in what was the Colts’ first home game of the season. Two varsity games, including Mount Pleasant and North Stanly, were cancelled when the Colts went into quarantine following COVID protocols.

Penalties combined with a physical visiting defensive unit kept the Colts off the scoreboard in a 27-0 home loss.

The shutout was only the fourth in the past five football seasons under head coach Brett Morton and the first since Week 10 in 2019.

“When the Health Department sends you home for two weeks in the middle of your season, it completely disrupts everything,” Morton said.

Despite having limited practice, Morton said his team “came out and competed at a high level for the whole game against a very good team.”

However, West Stanly (2-1) was whistled for 10 penalties for 70 yards in the game, several hampering the Colts’ offensive possessions.

Oak Grove (3-1), ranked No. 3 in the 3A Western Region, avoided trouble in the first quarter after a bad punt snap went to the goal line. Grizzlies punter Conner Sorensen ran the ball back to the Grizzlies’ 19-yard line, well short of the first down.

The Colts’ best starting position and furthest march down the field came in the ensuing possession. West drove to the 10-yard line, but a false start backed the Colts up. Oak Grove stopped West on the next two plays.

Oak Grove then drove 84 yards in nine plays as Connor Creech threw the first of three TD passes in the game. His 46-yard strike to Jake Smith put the Grizzlies on the board early in the second period.

The Grizzlies’ up-tempo spread offense added another touchdown on a 25-yard Creech run to lead 14-0 at halftime.

West’s offense was limited to 132 total net yards despite gaining more yards on the ground than Oak Grove (101 to 58). However, the Grizzlies’ pass game out-gained West 166 to 31. Creech was 15-for-20 through the air, throwing two second-half touchdowns.

The visiting team also had just two penalties in the game, both coming in the final four minutes of the game leading by the game’s final margin.

“We had too many penalties; we made too many mistakes. It’s what we are dealing with right now, all the adversity we are fighting through,” Morton said. “You can’t make those mistakes against a team as good as they are.”

The Colts are scheduled to travel to Ramseur Friday night to take on Eastern Randolph (3-0). The Wildcats won at Williams 8-6.