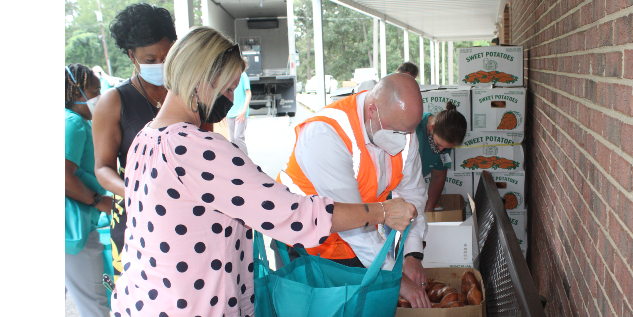 A partnership between Stanly County Schools and Atrium Stanly brought a truckload from Second Harvest Food Bank of Metrolina in Charlotte to feed Stanly’s families.

The event supplied meals for 100 children and their families in one hour to Stanfield, Locust, Oakboro, Endy and West Stanly Middle School families.

Three more mobile food pantries will take place before the Christmas holidays, Atrium Community Engagement and Corporate Responsibility liaison Nicole Williams said. The next events will be Oct. 7 in the Badin area for northern schools in the county, Oct. 25 at Central Elementary for the Albemarle district and Nov. 30 in the Norwood area for the southern Stanly schools.

“Atrium Health Stanly is excited to sponsor four mobile food pantries for the students and families of Stanly County Schools. Before the end of 2021, every school in the county will benefit from having (a food drive) in their district,” Williams said.