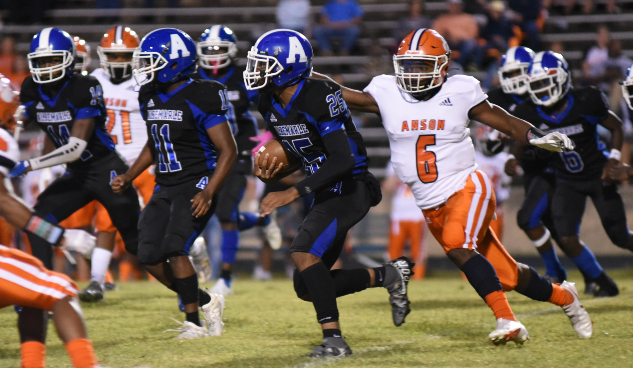 Anson County’s head coach, along with several members of the Bearcats’ coaching staff, had to have looked familiar to Stanly residents at Friday’s Albemarle home game.

The Bearcats are coached by former West Stanly football standout and North Stanly head football coach Ralph Jackson, while several of his assistants hail from Stanly.

Jackson’s squad proved too difficult for the young Albemarle team playing many underclassmen in starting roles this season. Anson scored two touchdowns in the first four minutes en route to a 33-0 shutout of the Bulldogs.

The loss for Albemarle (0-4) was the first home shutout loss since the Bulldogs lost in 2017 to Eastern Randolph 22-0. It was the 10th shutout loss for the Bulldogs under fifth-year head coach Richard Davis and the second this season.

Anson (1-3) got out to a fast start when Kendrick Maye took the opening kickoff and returned the ball to the Albemarle 9-yard line. Toney Gainey scored the first of two rushing touchdowns for the Bearcats two plays later.

The Bulldogs went three-and-out on their first possession, then a bad punt snap gave Anson the ball with a short field at the Albemarle 19. Luke Hyatt threw the first of three TD passes in the game two plays later to Dimitri Clark on an over-the-shoulder pass to put the Bearcats up 13-0.

Anson’s defense limited Albemarle to 68 net yards of offense, including -7 on the ground. Ander Artis and Dre Davis combined for 75 passing yards on 12-of-22 passing.

The Bearcats finished with 307 total yards of offense and possessed the ball for 29:18 minutes.

Davis said he was happy with the fight his players had in the game.

“In the second half, we could have easily laid down and it would have gotten much worse, but we kept fighting,” Davis said.

Davis added his team “is in a maturation process. We’re going to take some lumps. I told the guys we would go through some growing pains…what’s going to build our character going forward is how we respond to these adverse situations.”