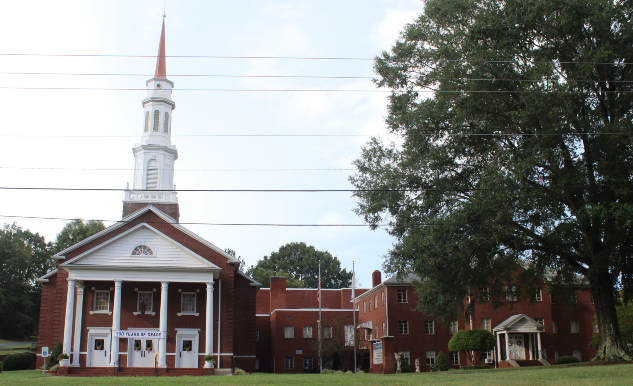 The phrase one local church adopted about God’s grace has taken on a double meaning with its recent celebration: “100 Years of Grace.”

The church was born out of a facility called Almond’s Hall. One hundred years ago, Almond’s Hall hosted church activities, bluegrass performances and similar events.

“Anything that came to town wound up at Almond’s Hall,” Pastor Delane Burris said.

First Baptist Church of Albemarle had revival meetings at Almond’s Hall and tried to start a church there, Burris explained.

Wiscassett Mills, which provided many of the houses in the area where Grace Baptist is now, provided the land for the church. The company also gave three monetary donations “to help the church get on its feet,” Burris said.

By the late 1930s, Grace Baptist’s membership rose to around 200 members and continued to grow. Two decades later, Burris said, Grace was a megachurch with close to 700 members on its roll, with around 560 attendees for Sunday School.

“There was a great need for buildings,” Burris said.

Approximately 25 years into the life of the church, he said, Grace began construction on new buildings. It took 25 years, but the entire structure still in use today was completed. Burris added the buildings were paid for 10 years after their completion.

The church saw struggles in the 1980s, with attendance dwindling down along with a large building to heat, cool and maintain. There were some internal battles, he added, but Burris said, “God was faithful through it all. He was right there keeping that church afloat…I believe God put us there for the people that are in and around our church today.”

With the mill now closed, Burris said many people are at their doorstep, turning it into a mission.

Grace has several outreach programs to stay connected to the community. Unique among those programs is Grace Street Hockey. Before the COVID-19 pandemic, youth and older players played inside a temporary rink in the church parking lot, playing without skates. Between games, Burris, who serves as the referee, delivered a devotional to players and fans in attendance.

The hockey program is one way the church “reaches out to the community to draw interest,” Burris said.

Another program is called Jehoash, for the Old Testament story of a king of Judah who wanted to rebuild the temple. Jehoash put out a chest and asked people to give, which is what Grace’s program has done as well. In 10 years, the fund has collected around $250,000, which the church has used for remodeling and repainting after suffering flood damage.

“The community stepped up and helped us, and we paid it in full,” Burris said. “It’s truly amazing to see how faithful God has been through all of this.”

In the early 2000s, Grace Baptist also hosted block parties, inviting their neighbors over as well.

“We’re still trying today to reach out to our community in and around the church,” Burris said.

Grace Baptist also has been broadcasting its services since 2017, with the help of Tommy Silince, Burris said. The church has a YouTube channel and had the technology in place for live broadcasts before the pandemic forced the closure of in-person services.

The church now has around 340 members, the pastor said, and will soon finish work on a 400-page book detailing the church’s first century of existence.

“Grace Baptist) is a sweet church. It’s a community church; it’s not what I would call a city church,” Burris said. “All we’re trying to do is continue the legacy of enjoying God’s grace and showing God’s grace.”